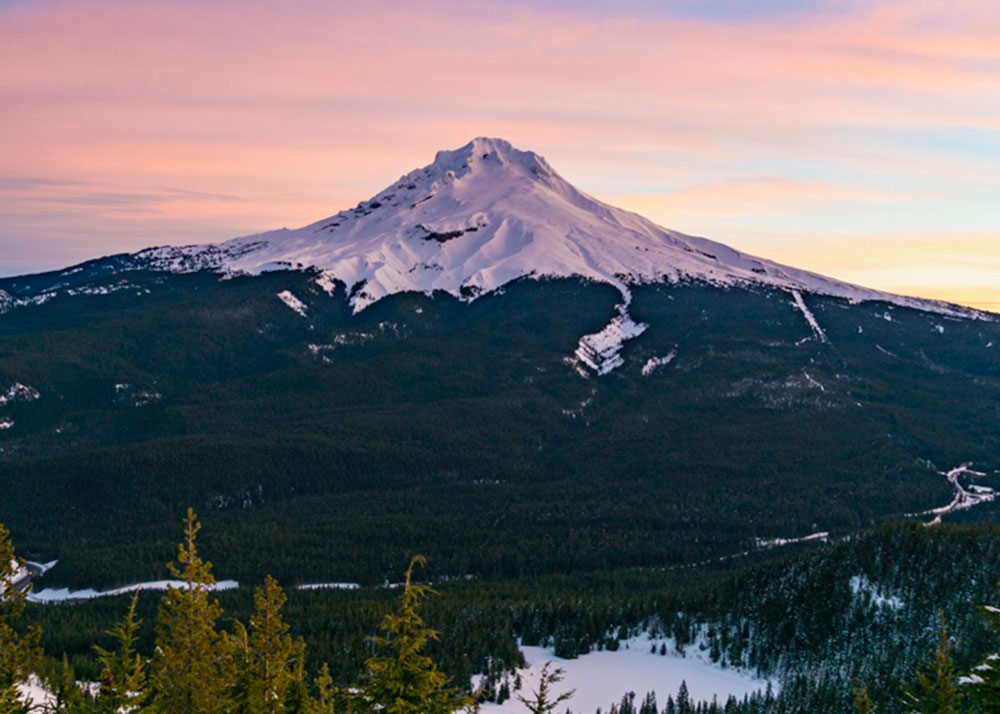 Climbing Mount Hood can be a wonderfully fun adventure. Mount Hood is the tallest mountain in Oregon, and the second most climbed mountain in the world. On clear days during peak climbing season, the mountain is never empty. While Mount Hood is not a highly technical endeavor, it does require some mountaineering skills and equipment. Climbing conditions are best in the spring and early summer, roughly April to June, depending on the year.

Gear
Climbers should carry a backpack large enough to carry all their gear to the summit. A pack in the 30-45 liter range will suffice.

At least one alpine ice axe is needed on Mt. Hood. Though the terrain changes year to year, the upper chutes that lead to the summit are typically in the 30-55º range, with deadly 600 foot runouts. Climbers should carry an ice axe, be familiar with how to use it, and should be able to self-arrest instinctually. Ice axes can be purchased new, or rented from Next Adventure at a fraction of the cost.

Climbers will also need to wear crampons. Any real alpine crampon, such as the CAMP Stalker, Black Diamond Contact, or Grivel G12 will be perfect. Crampons must be fitted to the climber’s boot before leaving for the trip to ensure both compatibility and a snug fit. Crampons can be purchased starting at approximately $100, or rented from Next Adventure for $8 for the first day, and $5 every additional day.

Mountaineering boots are necessary for Mt. Hood. Boots specifically for mountaineering have far stiffer soles than average hiking boots, enabling climbers to ascend steep terrain wearing crampons. Most boots will have a waterproof membrane to preserve dryness, though some just have a layer of treated leather. The old style plastic boots that can be rented at other shops are heavy and uncomfortable, and unnecessary for Mt. Hood. Synthetic boots can be purchased from Next Adventure and can also be rented for $15 first day/$8 every additional day. 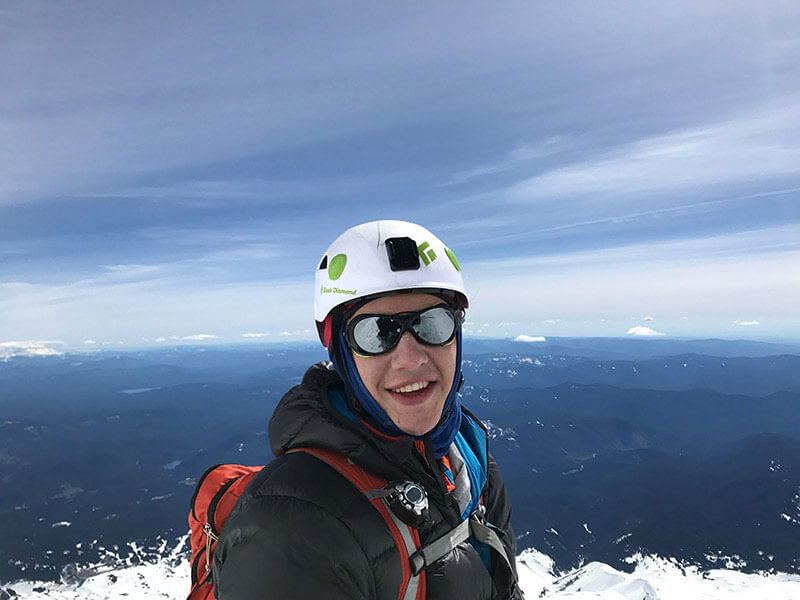 Helmets are a recommended piece of gear for Mt. Hood. While some climbers choose not to wear them, they should be worn at all times. In addition to the risk of getting hit by your axe in a fall, climbers have been killed on Mt. Hood by falling chunks of ice or rock, which can break loose as temperatures heat up in the morning.

Ropes are often helpful for newer climbers. Many parties choose to rope up, and steep sections can be protected by pickets and or ice screws, depending on the conditions.

Climbers should dress appropriately for the weather, and carry extra layers. Depending on the weather, a softshell pant and sometimes a layer of wool long underwear can be a great combo. Make sure to carry rain pants or some other waterproof layer in your bag. Wool shirts and fleeces make great climbing layers for the upper body, but be sure to carry at least one insulation layer of down or synthetic insulation, as well as a waterproof shell in your bag. Carry an extra pair of wool socks, as well as a hat.

Glacier goggles or some sort of dark sunglasses with side shades are mandatory. Even on cloudy days, the sun reflects light up into your eyes, and can cause snow blindness if they aren’t covered. Make sure to wear plenty of sunscreen, especially on your lips and around the bottom of your chin and under your nose, as light reflects off the snow.

Weather
Weather will be the most important factor in any climb of Mt. Hood. Check the weather in the week leading up to the climb date, and pay attention not only to the weather for the day you’re climbing, but a few days after. Bad weather that’s shown up earlier than expected has been the cause of several fatal accidents on Mt. Hood. Keep an eye on not just precipitation, but also the freeze altitude. The lower the altitude, the better, as warm temperatures heat up the rime ice and can cause chunks to fall. High winds will ruin a climb simply by making climbers uncomfortable. Ideal conditions are clear skies, no chance of precipitation, low wind, and cold temperatures. Mountain-forcast.com provides a great weather forcast that can be sorted by elevation. 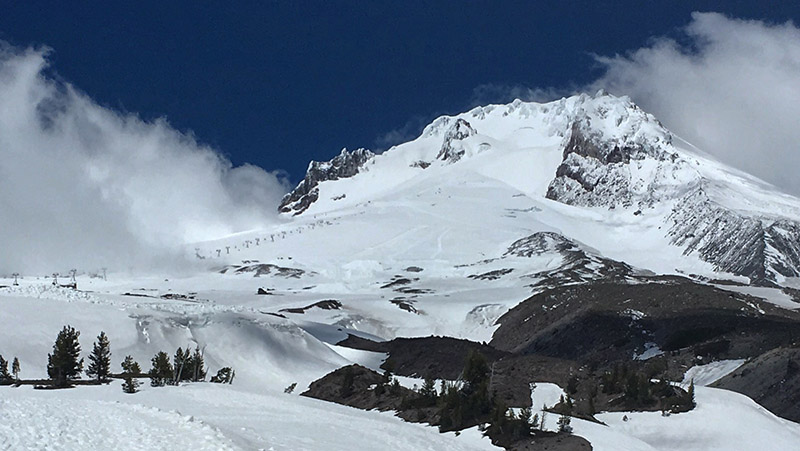 Route
The standard route up Mount Hood is via the South Side. After checking in at the Climbers’ Hut at the Wy’East Day lodge, climbers begin up the climbing trail from the parking lot. Follow the cattrack up roughly two miles to the top of the Palmer ski lift. This part of the climb includes 2540 feet of elevation gain, and will take between two and three hours at an average pace. Depending on conditions, many climbers put on crampons at the this juncture.

From there, the route continues up the Triangle Moraine, to the East (climber’s right) of Crater Rock, the large rock visible in the center of the mountain’s south side. The terrain increases in grade here, as climbers ascend 2000 vertical feet over roughly a mile. It’s not a bad idea to take a compass reading at Crater Rock, as the fall line, that is the direction someone would slide if in a free fall, continues to the West of the lodge, towards the Mississippi Head, and it’s easy for climbers to get lost in the event of a sudden whiteout. Before arriving at Crater Rock, climbers will smell the sulfuric gas from the fumaroles (steam vents) around the formation. Be careful not to spend too much time directly breathing the gas in, for it can be dangerous. From Crater Rock, climbers must choose their route to the summit. 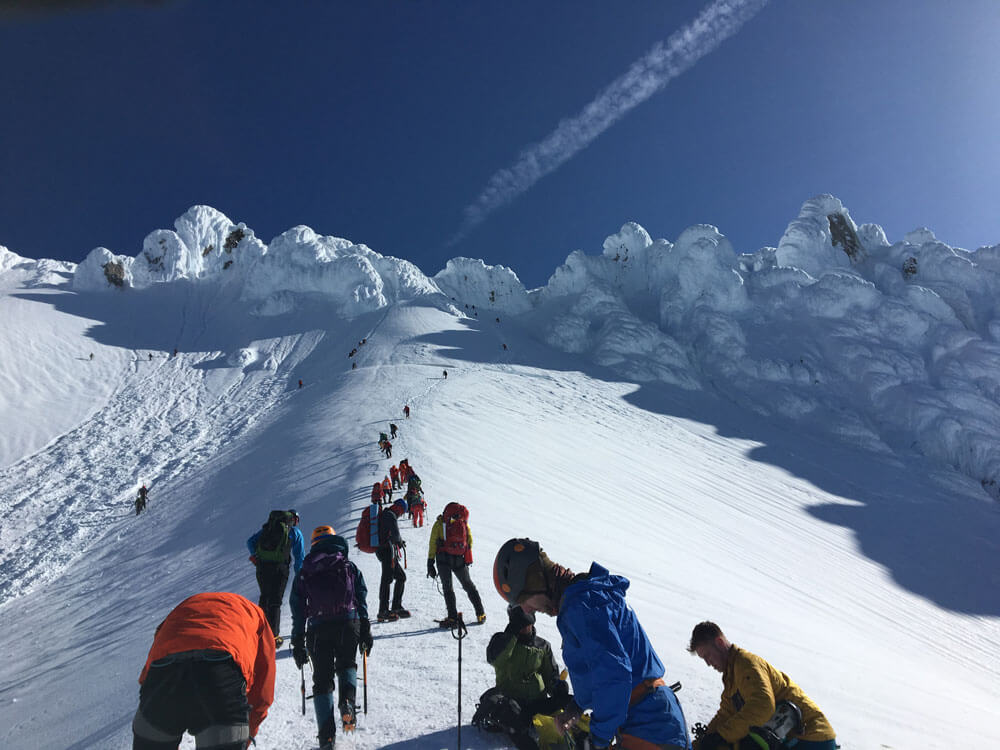 The Pearly Gates are a set of steep chutes directly above Crater Rock. Climbers should continue up the Hog’s Back, the ridge leading from Crater Rock up towards the summit, and either carefully cross or traverse around the bergschrund (large crevasse on the Hog’s Back). Depending on conditions, the bergschrund may be completely covered or gaping. Carefully assess the conditions. Many parties will rope of before exposing themselves to the bergschrund. Continue up the Hog’s Back to the largest obvious chute. The primary chute of the Pearly Gates is roughly seven feet wide and curves up around to the left before curving right again. As the chute widens, continue the last few hundred feet to the summit. The Pearly Gates are notorious for bad bottlenecks. 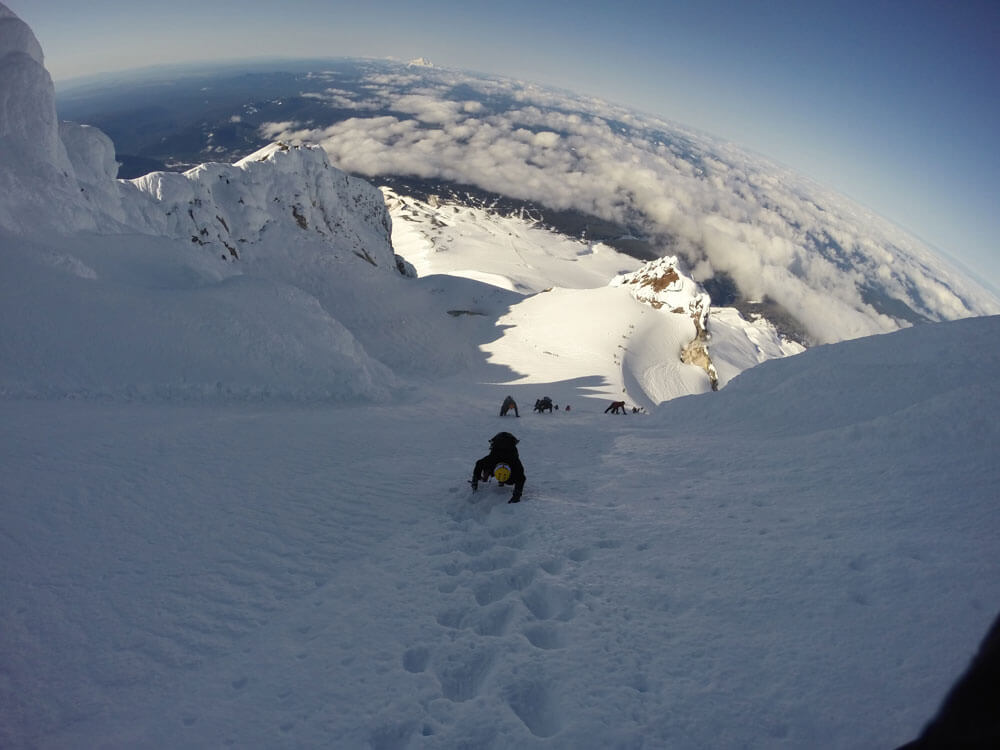 The alternative route to the summit is via the Old Chute. At some point on the Hog’s Back, begin to cut left to the West. Continue up and left until a large and obvious chute is visible. The chute is roughly 100 feet long and 10-15 feet wide. Ascend the Old Chute and continue up and right to the obvious summit. Descent via the Old Chute is generally safer because it isn’t exposed to the bergschrund and there’s less traffic.

Regardless of which chute you descend, the route down is the same as the route up once you’re on the Hog’s Back. Once you’re past the Devil’s Kitchen (fumaroles by Crater Rock), you can remove your crampons and glissade down.

Closing
Always be sure to tell someone where you’re going and when you expect to be back, in addition to the paperwork in the Climbers’ Hut. Though Mt. Hood is seemingly accessible, climbers die every year due to a variety of accidents. If you’re new to mountaineering, be sure to go with someone who’s familiar with the climb. Make sure you’re well prepared with enough food, water, and warm clothing. Much of Next Adventure’s staff has climbed Mount Hood at least once, if not more, and would be more than happy to chat with you about your climb!