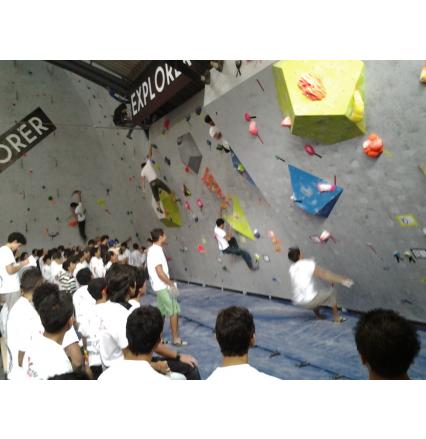 At a friends birthday party I met local climber and employee J. Francisco Chambers.  I told him that I went to his gym to climb and had a good time, but also mentioned that the gym needed a little love, and asked if I could assist in setting routes.  He said that it shouldn't’t be a problem but needed to ask the bosses ( a few own the gym).  We agreed that I would come in on Monday to get started...

So Monday Sofi and I showed up and were welcomed, as I have been the whole time while in Ecuador. Owner Edgar Aulestia came up to me and we had a friendly chat about what I could do. As normal he said, ”well I cant pay you, but I can let you and Sofi climb for free”, to which I quickly replied, “ no no I don't want money, I just want to help the community of Quito”.

After that ‘Chambers’, Sofi, and I got started. Setting one lead route and many other bouldering problems, 5 hrs seemed to fly right by. It was good to be a part of the climbing community again, as I was in Portland at the Circuit. Needing to get out of there way sooner than 9ish to book our flight to Cuenca, pack, eat and sleep; but we were having too much fun with the local friend climbers.  As we walked out tired with soared finger tips and hungry, I felt happy and satisfied; ready for more work and to help as much as possible.

Sofi and I planned to leave for Cuenca (a province in the South of Ecuador) the next morning, but when we booked out flight, the Airlines had a different plane for us, read tomorrow to hear about this full fledge adventure..........

As ideas have been flowing and I've been getting feedback from the community I noticed that setting routes is harder than it seems. Recently we have been developing a system where we take one section of the the wall, strip all holds and molds down, clean them and start over with a new wall. Having the power to make new ideas is always fun..... but tiring, especially when you are there for 9 hrs.

Being 6 foot tall and having a long reach, I've been setting routes in all grades to to my size. Often when thinking and planning a V2 I have to remember that not everyone is 6 foot tall and has a 6 foot wingspan. So that changes a V2 to a V4 for some of the shorter people. That's the hard part, setting a new route that feels great only to get frowns from people and realize it's more advanced than it's rating.

Anyway, the second stage of this wall is the far right side, it's the steepest section of the wall. Since it had one big mold already on it, which I heard had been there awhile, we wanted to move it and add another large mold. With the molds being big, we created a hauling system to get it down and up using a Grigri device and the rafters above. This meant we were able to move this big feature effortlessly. After half the day was already behind us it was time to make some routes. From what I have learned it helps to set the hardest routes first. That way, as you get tired, you move down to an easier one, and that makes it more practical, for grading routes.

At about 5 o'clock crowds started showing up to get their workout in, but we only had 5 routes up on the big, wall. Thankfully, I've noticed that Ecuadorians are some of the nicest people, and as the crowds came in they wanted to give a helping hand. This meant we set 4 new routes in just under an hour and everyone helped clean up. With 9 new routes up and running, and 9 hrs later, I was tired and happy to see people enjoying the new wall.

Now I just gotta sit back and relax while waiting to hear what the community has to say!!!