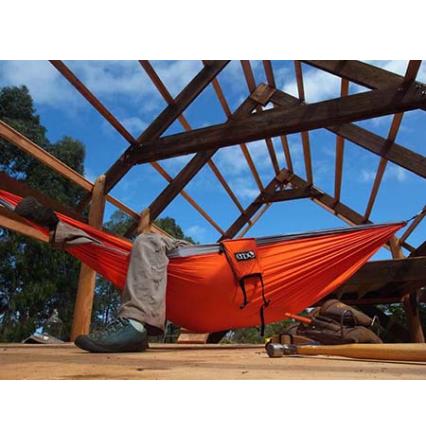 When I heard Next Adventure was getting in the new line of hammocks from Eagles Nest Outfitters (ENO) I was totally pumped. I’ve owned my ENO SingleNest hammock for about three years now and it’s served me well on many wonderful adventures.

Being over 6 feet tall and with a few back problems to start with, I’ve found that sleeping in the hammock frequently irritates my back. However, the occasional night off the ground is still welcome when camping or backpacking. In fact, the best times I’ve had in my hammock have been just relaxing on warm afternoons, reading a book or sipping a brew with friends. 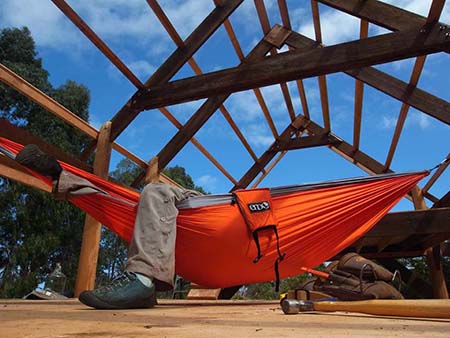 The SingleNest Hammock has a weight limit of 400 lbs, a limit I’ve tested and pushed with two (and occasionally three) people laying the long way or lounging side-by-side, feet on the ground, like an ultra-light camp couch. Since the hammock is just over 1 lb and compacts easily, it’s perfect for backpacking. It’s cozy and fun whether you just want to sleep off the ground or hang out in the afternoon sun.

I did make a few mistakes with my hammock and hope you can learn from them. First off, when sleeping in a hammock it’s important to insulate properly. Since body weight compresses the insulation in a sleeping bag, using a foam camp pad inside the hammock helps protect from the cold night air. I spent one night shivering in my 20° sleeping bag while it was a balm 45° outside before I figured this out.

It’s also important to make sure the hammock is anchored in a reliable spot. An 8-inch thick tree fell on a friend of mine in his hammock due to dying roots and some sandy soil, resulting in a concussion and severely sprained wrist. The tree seemed strong when we set up the hammock but collapsed several hours later while he was asleep. It was an accident that could have been avoided by looking more closely for sturdy soil and signs of decay on the tree.

On top of the single person hammock that I own, ENO has released several other great items being carried in the shop. There’s a hanging kit, bug net, two person sized hammock, even the HotSpot - a set of wings that attaches to your sleeping pad to hold it in place inside the hammock. But don’t let all the options intimidate you, this hammock is great whether it’s tricked out with features or just tied up to porch beams with some five dollar para-cord.

Next Adventure has a great selection of hammocks of all shapes and sizes. Take a look!