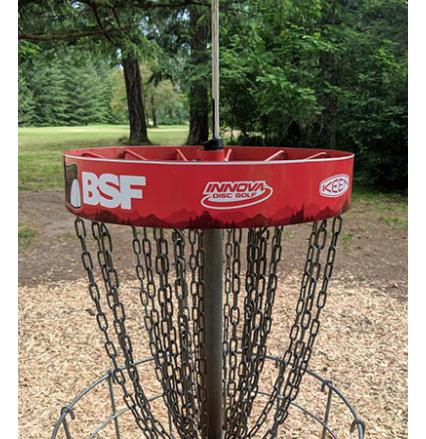 Hey everyone! Welcome back!

For some of you, this may be your first exposure to the Epic that is the Beaver State Fling PDGA National Tour Event (BeaverStateFling.com)- it is truly something to savor. For others who play this great game with us every day in the great Pacific Northwest, this is the event we dream of winning, and more often than not, even playing. Riverbend DGC’s namesake is rather appropriate considering it is neighboring the Clackamas River on two sides and dense forest ridgelines opposite the continuously flowing glacial water. Carved fairways, hidden putting greens, formidable cliffside descents and some of the most technical challenges anyone in the sport may ever get to play. 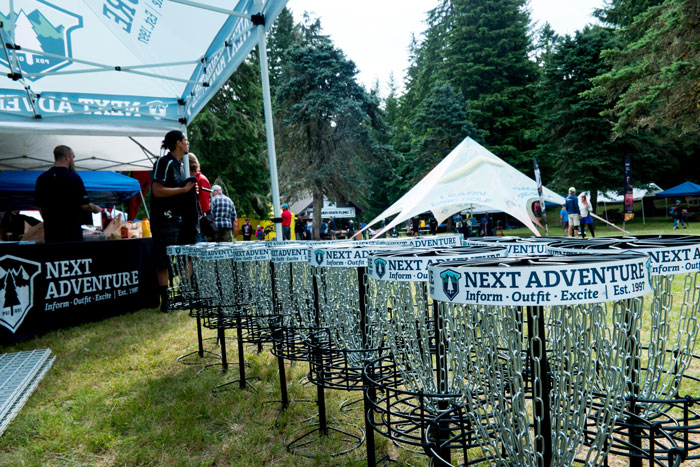 Welcome to one of the holiest of sites in disc golf.
Blaspheme and you are struck down with bogies. Those faithful are rewarded with the grandest triumphs.
This is our Mecca - our sacred place. We worship at this altar of flight, flora, and fauna.
Let loose and fly free.

This year’s installment of the Beaver State Fling was truly something to behold - imposing weather, amazing competitors, and a state park full of insanely enthusiastic spectators. Even though the weather was lacking, there was electricity in the air as bodies continued to flow into the venue with the likeness of a tsunami. 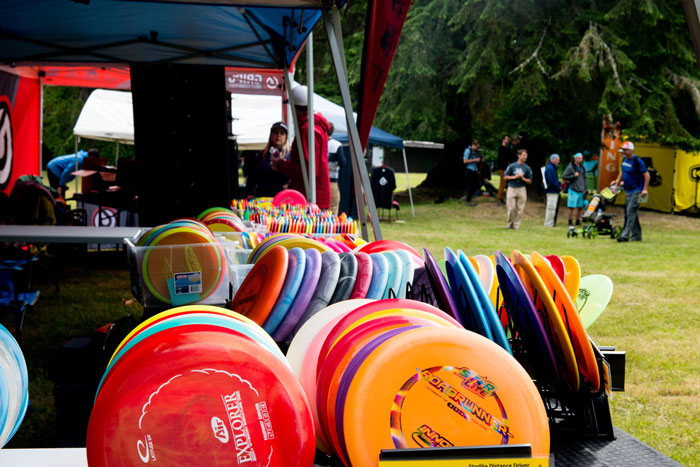 The festivities kicked off on Thursday evening with participants and spectators being torn between doubles and the annual Pro Clinic featuring Madison Walker, A.J. Risley, and Garrett Gurthie. At the same moment, folks interested in the opportunity to play with touring professionals joined the super competitive round of random doubles on the famed BSF West course leaving nobody left out. Doubles found itself full with over 60+ players and a huge payout!

Friday’s opening pro round and second pro round were greeted with patchy, yet sunny conditions for most of the day, spectator galleries of up to 150 people at times, a vendor village boasting over 30 merchants, services, clubs, the famous Beaver State Fling Mini Disc Golf Course (a collaborative effort by Next Adventure and the fine fellows at Sweet Plastic) and a bustling support staff operating at 130% - this was on a weekday! Some of us do work you know. At first glance, you would disagree. Luckily for me, disc golf is my work. Friday closed with Drew Gibson leading the men’s field by putting together two solid rounds amassing a 103 (-19), and being closely pursued by his peers. The Women’s Open field was being solidly held at bay by Catrina Allen’s 121 (-1). At her heels, a handful of skilled ladies within five strokes.

Saturday morning was met with the majesty of the PNW, our infamous and well-known liquid sunshine. In Portland, we hadn’t seen rain much at all, so in ways, this was a real blessing. The weather continued as such for the remainder of the weekend. Off and on it went, like a curious toddler, with a stool, and a light switch - absolutely annoying and inconvenient all at the same time. Even though the weather was garbage, it didn’t prevent the onslaught of spectators as they filed in like ants to discarded picnic scraps. By lunchtime, all of the golf course parking lots were full (all five of them), the west boat launch maxed out, fire lanes abused, and overflow parking was being utilized in it’s full. Luckily, Next Adventure went above and beyond the norm and provided two continuous courtesy shuttles to the distant 1.5-mile overflow parking lot and provided relief for the Pros and Amateurs trying to get to their respective tee times across the entirety of the park. Parking was an issue - never before has the Beaver State Fling filled the lots like this.

Saturday closed with a still tight Men’s field after witnessing Garrett Gurthie’s inhuman mastery of a flying disc (carding two eagles back to back on BSF West) and an equally tight Women’s field. The rain continued. 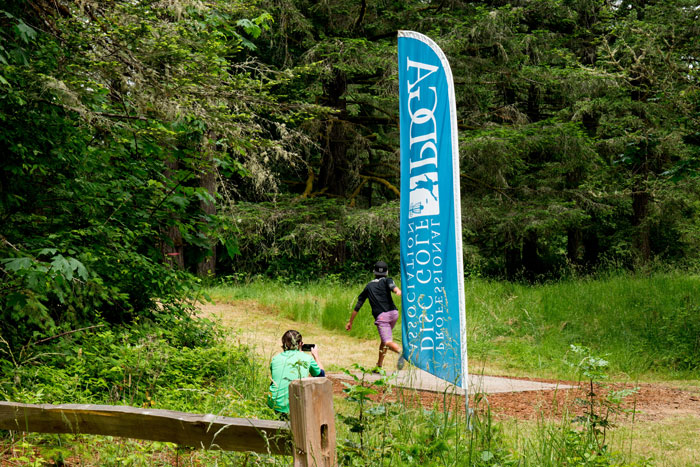 My morning began with a 6am trail run with the owner of HukLab (huklab.com) - Jay Harbour, and his spunky mini border collie Levon. Trouncing through the forests and trails only to be met with the first of the final round tee times as we rounded out our adventure. It was 7am and the game was afoot! Golfers began unleashing their arsenal of best judgment with the highest hopes for success.

After a slow start for the boys, it quickly picked up. Rather than tell you what I observed, here are video links and score links to both of the Open final rounds. Enjoy!

Final scores and finishes for all divisions - Amateur and Professional
They are posted here for your viewing pleasure - www.pdga.com

We all have our options, perspectives, and moments we want to highlight in our minds - These are the thoughts and opinions of our wonderful golfers that represent Next Adventure and our well-knit disc golf community here in the great PNW:

Pro Masters (MP40):
Courtesy of Jason Pinkal
The Beaver State Fling brings pits the best MP40 players from Oregon against a number of the top touring pros. The past few years have seen epic battles for the podium spots and this year did not disappoint.

The Men's Masters division started their tournament on East Course Friday morning. Touring Pro, Patrick Brown, finished with the hot score of 54 and 8 other players were able to stay under 60.

Friday afternoon saw the division move to the West Course. Weather conditions took a turn from the worse, with players having to break out their umbrellas and rain gear to fend off Oregon's liquid sunshine. Colorado native, Joe Rovere, wasn't fazed by the weather change and shot the hot round of 53 to take the lead.

The division returned to the East Course on Saturday afternoon and ended up playing half the round in some of the heaviest rain Oregon has seen since February. A majority of the field struggled with most competitors scoring worse than round one. Again, Joe Rovere shot the hot round carding a 54. This extended his lead to six stroked on second place.

The final round took place on Sunday afternoon. The MP40 division returned to the West Course with weather conditions not much better than Saturday. Joe Rovere shot another hot round to seal up the win shooting a combined 23 under par for the weekend. Patrick Brown was able to make up three strokes on Santa Cruz native, Shasta Criss, to tie for second place at 13 down. Next Adventure Disc Golf Ambassador, Jason Pinkal, ended in a tie for fourth with Don Smith, shooting 8 down. 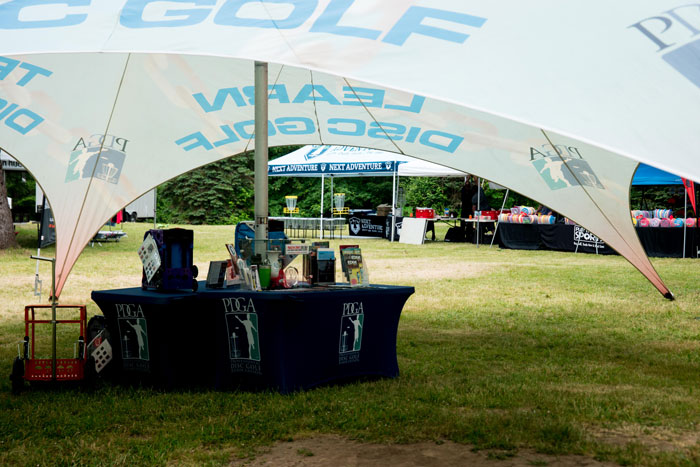 Women’s Advanced Masters (FA40):
Courtesy of Cindy McMahon
Great weekend at the BSF! I played with some amazing ladies all weekend in the FA40 division, which consisted of 8 ladies.

The amateur portion began Saturday with all amateurs playing two rounds. One round in the morning & one round in the afternoon with the pros getting in their third round in between. The rain held off for our morning round but came on with a vengeance for our afternoon round. Sunday's final morning round for the amateur players was also a bit wet at times, but those of us from the area are very used to playing in those conditions.

The courses looked amazing thanks to volunteer efforts leading up to the event. Fresh new bark dust was spread around baskets, and that really helped with the all the liquid sunshine that rained down over the weekend. The baskets also looked awesome with their custom Beaver State Fling wraps.

Tournament central & the vendor village was packed, and many participants & spectators did not let a little rain keep them away from checking out the different companies who were present.

Once again, an 18-hole mini golf course was set up in the area surrounding TC. Gawain Stern & his volunteers once again organized the mini golf festivities. New this year was 18 DD medal mini baskets provided by tournament sponsor Next Adventure.

The Next Adventure shuttles were awesome. Especially since all my tee times were on 10 west & 11 east, which is quite far from TC. Players & spectators really appreciated that service.

I personally had two rough rounds on Saturday. They were probably the worst two tournament rounds I played in a while, found myself 3 strokes out of 2nd & 3rd & 11 strokes out of first. I was, however, able to bounce back & play really well Sunday. I came up 1 stroke short of making up 11 strokes to tie for first and ended up taking 2nd. Congrats to Selena Marshall, who traveled all the down from British Columbia, for taking first. I am very pleased to take home 2nd place and stoked I didn't give up & fought hard on Sunday. Never give up & keep fighting!!

Pro Grandmasters (MP50):
Courtesy of Craig Nielsen
From the beginning, it was clear that the Pro Masters 50+ division for 2018 was going to be a very competitive field. For the 18 competitors, the average player rating was 962, with many skilled golfers making their annual pilgrimage from California to the Beaver State Fling. The perennial champion of the BSF, Jim Oates of Fair Oaks, California, made his statement early with a first round, 55 (6 down) on the East Course. His early score was matched only by Bend Oregon’s local favorite, Jim Tobish with a scorching 1035 rated round of 55.

Milo McIver and the Oregon weather pushed back on the Pro Master 50+ field for the remaining three rounds, only allowing 3 players in the second round and 2 players in the third round to break Milo’s difficult Par 61. The battle was set for final round action, with the two Jims battling it out for the Championship. Oates’ strong rounds 1 and 2 pulled him through, despite Tobish’s championship bid, Nevertheless, he placed solidly in 2nd and brought home a beautiful trophy. In fairness to Tobish, Oates has won every year since 2012 and once again proved why he is the champion with his consistent high-level play. Meanwhile back, another battle was brewing for the last podium spot. Next Adventure’s Craig Nielsen struggled the first two rounds but put together 2 respectable sub 60 rounds, including a bogey-free final round of 59 to claim the last podium spot and a third Place Trophy. Jeff Cox, the local favorite, tied with Californians, Bruce Knisely and Peter Sontag for 4th Place. 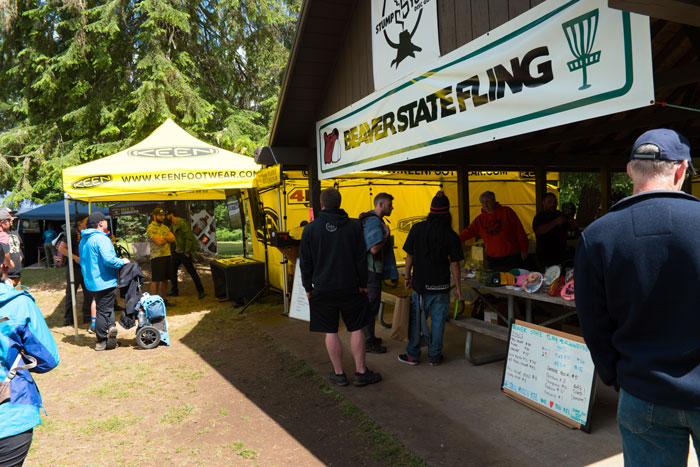 Men’s Pro Open (MPO):
Courtesy of Andrew Nava
What an amazing event by Stumptown Disc Golf, Keen, Next Adventure and huge thank you to the Jeff's [Mittl & Hagerty] and all the amazing volunteers. Year in and year out the Beaver State Fling runs smoothly and efficiently. Touring players have told me, this is their favorite tournament of the year - not only because of the view of nature that Milo McIver brings but because of the efficiency, hard work, and dedication that is put into it in order to make the great event it has become. This epitomizes the joy of disc golf - seeing all the vendors, players and fans gathering together - to enjoy this sport we love.