How Not To Start Kayaking

How Not To Start Kayaking

WARNING: The following blog is the story of my first time kayaking. It is not an example of how one should choose to pursue kayaking, but instead a representation of what you should not do when approaching the sport. There are infinite resources and groups to help you get started. This is exactly how you should not start kayaking.

You would not be remiss to say that I grew up under a rock. Tucked back into the woods down a dirt road outside of a farming town in central North Carolina, I wasn't exposed to much in my childhood years. No cable TV and limited dial up internet kept the sport of whitewater kayaking a complete unknown to me for many years, despite having one of the largest whitewater communities in the world only a few hours away in the Appalachian mountains. I will absolutely never forget my first exposure to the sport. When I was thirteen my family took a vacation to the mountains to visit Appalachian State University where my oldest sister hoped to enroll. We went for a hike along one of the nearby rivers and while we stopped to rest at an overlook a small group of kayakers pulled into an eddy just above a small waterfall below us. There were about five of them, all in playboats, running the drop one after another. The last kayaker approached the lip of the drop, popped onto his bow, threw a loop, and nailed the landing. It was a truly mesmerizing way to be exposed to the beautiful sport of whitewater kayaking.

That indelible moment occurred in 2003, and it was not for ten more years that my life as a kayaker began. The week of Easter in 2013 in San Antonio, Texas I asked my friend Roy if I could borrow his kayak. The plan was to drive to Big Bend National Park, put on the Rio Grande, and paddle down the river through its glorious canyons until I reached civilization again. The plot was flawless, and with a trusty 10 foot Pelican kayak stuffed full of as much food and water as I could fit, there was no way I could go wrong. I bought a couple of crank straps and tossed the boat onto the naked roof of my Honda Element with a couple of pool noodles under it, then cranked that bad boy down until it had no chance of escape. A quick Texas drive later (about seven hours) I arrived at the Chisos Mountain Lodge to snag my last dinner surrounded by fellow humans.

The following morning I woke with the sunrise and made my way to the boat launch at Rio Grande Village. I packed my sustenance into the hull of the boat and secured my tent and bag of clothes to the deck. Without a second thought I pushed off the bank and simultaneously began my first day in a kayak, and my first paddling overnighter.

The Beauty of Boquillas

Were I a bit more wise, I might have taken the hint when I lost control at the first sight of mild current. Pushed up against the bank and under thick brush, my hat was ripped from my head and thrown into the water. I wasn't more than an hour in and I'd already lost something, but I was also committed to this plan, or lack thereof, and pushed on downriver. The Rio Grande carried me downstream at a manageable pace. Even with my nonexistent level of paddling knowledge, I was a quick study and had figured out that I needed to keep far from the bank and any kind of structure to stay in control. Before I knew it, I was entering the glorious halls of Boquillas Canyon. It was unlike anything I'd ever experienced in my life. Surrounded by giant walls of orange, tan, brown and gray like a natural cathedral all to myself, I floated along fulfilling the vision of what this trip was meant to be. My dreams were becoming a reality, and it was only day one.

The sun was just beginning to drop behind the canyon walls, sparking the realization that it was time to look for camp. It wasn't long after that thought crossed my mind that I had my first experience with a strainer. A log was jammed against the bank sticking out just below the surface into the current. Between the lack of direct light on the river and my unfamiliarity with the danger of the obstacle, I allowed myself to get too close before attempting to redirect the kayak. I washed into the strainer, pushed sideways and immediately exited the boat. The water was shallow, so after washing quickly into an eddy I was able to stand and easily walk back to the strainer where my kayak was now pinned. I pulled with everything I had, but with the first pull all I did was change the direction of the kayak which allowed it to wrap entirely around the fallen tree. As I struggled to free my only means of transportation, my supplies were dumped from the boat. Food, water, and gatorade were all pouring into the river and rushing downstream. After what felt like hours, but was likely about fifteen minutes, the kayak flushed under the strainer and miraculously popped back into shape. I pulled it over to a nearby gravel bar and took inventory. My tent and clothes were still attached to the deck, but I was down to one Gatorade, a package of tortillas, and two cans of tuna. All of the other food and drinks had washed far downstream. 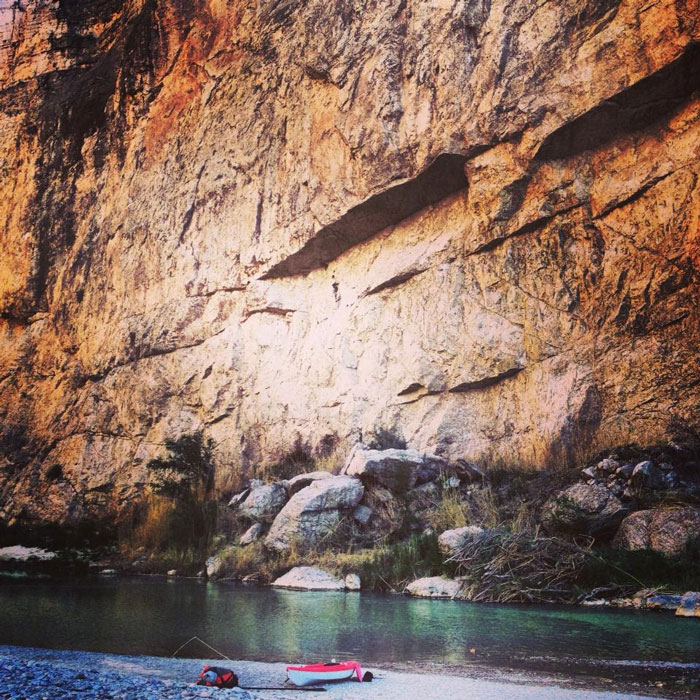 The view from my gravel bar campsite

Exhausted and nearly out of daylight, I set up my tent on the gravel bar. At the time I had no idea what a drybag was, so my sleeping bag and all of my clothes were completely soaked. Across the river a group of donkeys were standing on small ledges in the canyon wall. Precariously perched on their individual porches, they stared down at me, likely mystified as to why I was so flustered. I was equally mystified as to how they'd ended up on their tiny ledges, and took a moment to wonder how they might get back out of the canyon. I laid down on the bare tent floor to try and rest, feeling every piece of gravel in my back any time I moved. Staring at the stars through the roof of the tent, I listened to the donkeys calling to each other in the night, the bats chattering as they flew around in search of food, and the occasional gun shot in the distance. I stared and listened and wondered through the night. Should I turn around? I couldn't possibly make it much further without food or water, but was it equally impossible for me to make the trek back upstream?

I was still pondering my next move as the sun rose. Without a wink of sleep and no further interest in pursuing it, I rose from the tent at first light and packed up. I scarfed down the last of my tuna tacos and drank some Gatorade to fuel me for the trek back to Rio Grande Village. As foolish as I was, I knew I couldn't survive the rest of the canyon without supplies, especially after experiencing such adversity in just the first day. The following few hours were a mix of paddling when I could and dragging the kayak across gravel bars to make it past faster flowing water. I started the morning with no shirt on, but it wasn't long before I noticed that I was starting to get more sunburnt. I'd picked up a bit of burn the day before, but had mostly kept it under wraps with sunscreen. However, my sunscreen had escaped with most of my food the night before, and I was now susceptible to whatever brutality the Texas sun deemed fit for me. In extreme discomfort, I fought back and forth between whether I was more miserable with a hot, wet sun shirt rubbing on my sunburnt skin, or if I was better off just accepting more sunburn. The day carried on with more of the same, but my energy was depleting rapidly. Paddling against the current, dragging a loaded kayak, and fighting the heat were draining me quickly, especially since I was dehydrated and calorie deficient. I began to catch myself falling asleep while paddling upstream, occasionally losing ground if I dozed off for a moment too long. For the first time on this trip, I finally felt fear.

I don't know what time it was when they came around the bend, but it certainly felt as if days had passed since I left camp that morning. The sun was at its zenith, having absolutely cooked my skin and spirit. My lips were somehow already beginning to crack, and I wondered if the group of canoes in the distance were actually my first time experiencing a mirage. There were four canoes; a man and a woman in the first, the same in the second, and a lone man in the third canoe, which was tethered to a fourth that was loaded with supplies. As we pulled up into the same pool, an elderly lady with a British accent asked, "Are you okay?" Being a young man in fear of showing weakness, I responded, "Yes...." only to immediately notice my folly, and continue with, "but could I bother you for some water?" Reluctantly the guide in the third canoe filled a bottle for me, handing it over without saying a word, only doing so at the command of the elderly lady. His face said everything that needed to be expressed. "Dumb ass." I gulped down the water with desperation. While doing so, one of the other elderly folks from the group came up and started spraying me with sunscreen. I guess my burn was as evident to them as it was to me. "Thank you. Thank you all so much. How much further is it to Rio Grande Village?" I asked. The group looked over to the guide in search of an answer, but he still refused to speak. "About a mile and a half or two miles back to the boat ramp," said one of the men in the group. He refilled my empty water bottle, and as I thanked them again, they paddled off into the canyon. 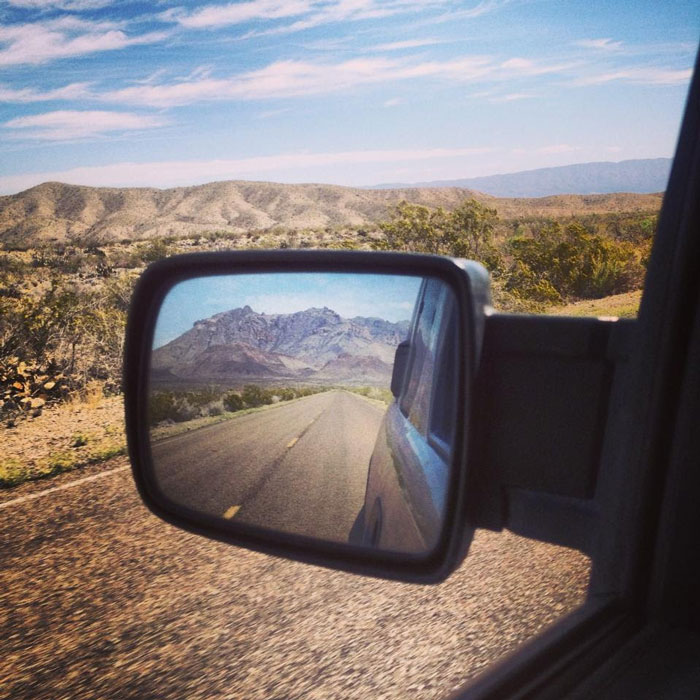 Feeling mildly hydrated, yet still exhausted, I continued my voyage upstream. Knowing that I was less than two miles from the put-in added a little pep to my paddle, but not enough to counter the lack of sleep from the night before. I continued to fight the urge to take a nap in my kayak, losing all concept of time. It began to feel as if I would never make it back to the boat ramp at Rio Grande Village. Finally things began to look familiar. The mild class one rapid where I'd lost my hat was just up ahead! I scampered up the gravel bar and put what little sprint I had into making it back upstream. Paddling as hard as I could, I arrived back where I'd begun.

Just the morning before I had come to the same spot, seeking adventure and the unknown. I certainly had the honor of discovering what those two words meant in that short span of time. 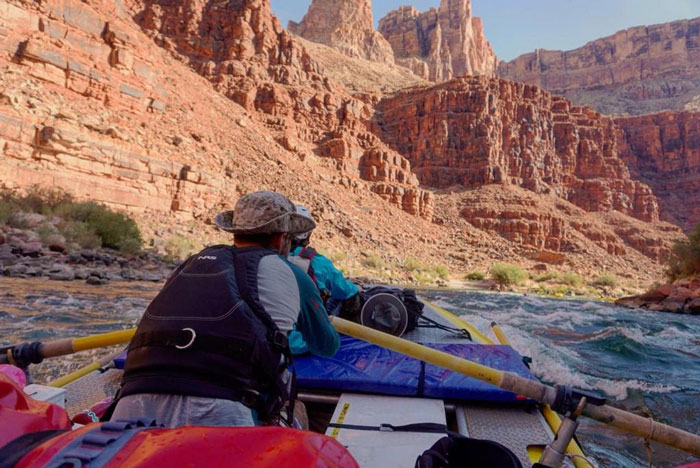 From ditch dingus to river runner. Rowing the Grand Canyon in October of 2019... the correct way.