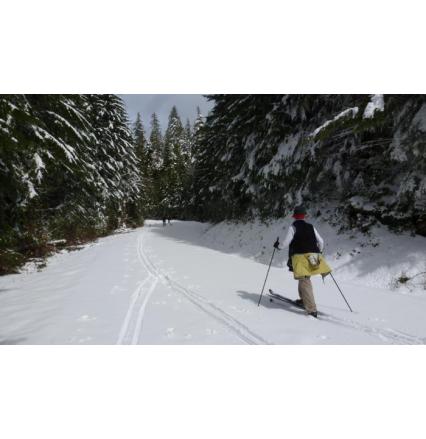 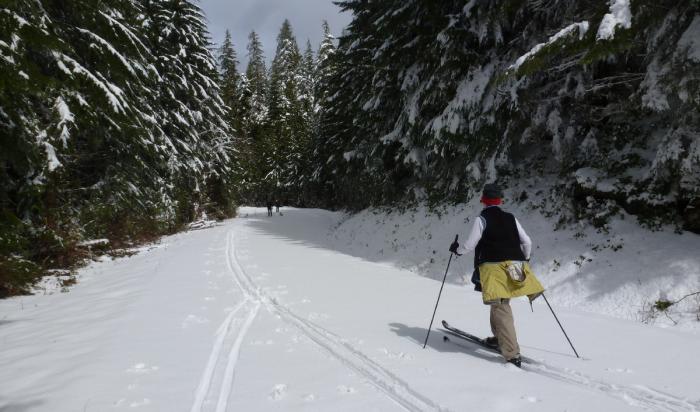 If you've seen "Portlandia" or the like and believe the hype, you'd think everyone in Portland rides a bicycle and that there's a coffee shop on every corner.  It's simply not true.  In fact, I know of at least five  non-cyclists, and there can actually be up to three blocks between java joints.  So, sure, it may look ideal on television, but we've got real problems here just like everyone does everywhere else.

For instance, about this time each year, folks in the Pacific Northwest are faced with a real dilemma.  There's still plenty of snow in the mountains, but the spring wildflowers are starting to bloom down in the valleys.
It's a tough decision:  Go skiing or take a hike?

Of course, that is just my personal challenge.  Friends and neighbors may have their own conundrums: Kayak or fish?  Climb or surf? Snowboard or disc golf?  You get the idea.  It can be tough, especially for those with varied outdoor interests.

Fortunately, Portland's central location between the Cascade Mountains and the Pacific Ocean, plus proximity to the Columbia River Gorge, provide ample opportunity for many outdoor activities throughout the year.    A late dump of low elevation snow recently allowed for the best of all seasons in one excursion:  A ski and a hike in one day.

With the snow level below 2000 feet, we didn't have to go all the way to Mount Hood to find skiable snow.  Close to Portland, Larch Mountain is the highest peak at the west end of the Columbia Gorge, and the road to its summit is gated in winter.  We saw few people and broke fresh trail much of our route.  Animal tracks crossed our path: rabbit, Douglas squirrel, coyote and others. A raven croaked in the hemlock trees, and finches and chickadees twittered in the brush.  The sun came out now and then from a mostly overcast sky.  Clouds swirled around the 4,055-foot white-dusted summit of Larch Mountain. 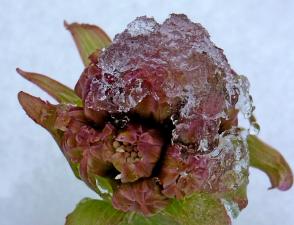 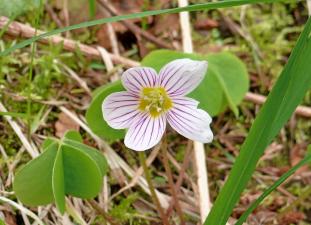 Skiing back to the car, I noticed an ice-covered coltsfoot flower bud jutting up out of the snow.  Remarkable how persistent and tenacious nature can be.

After four hours and six miles on the snow, we had had enough skiing for the day.  We drove down the Columbia River Historic Highway to Latourell Falls, where we took a short hike.  Latourell Falls makes an impressive 249-foot drop into a basin of black basalt encrusted with day-glow yellow-green lichen.  It's a great example of the geology that shaped the region, with striking rows of columnar formations below big lumps of pillow basalt. 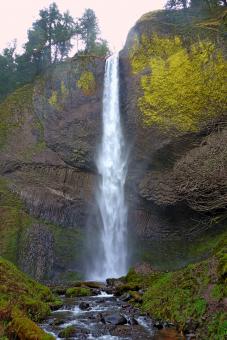 Trailside, we found some spring wildflowers starting to bloom.  Oxalis, the wood sorrel, had small white pink-striped flowers dangling out of its shamrock-like base.  And the bleeding heart had clusters of deep purple grape-like buds, a few beginning to elongate into the curiously-shaped pink flowers.  Other flowers will be coming soon on their heels.

Even stopping for views of Beacon Rock and the Columbia Gorge at Crown Point's Vista House, it was about half an hour for the return drive to Portland, making for nearly five hours of outdoor recreation with barely an hour's time in the car.  A spectacular day of winter and spring, skiing and hiking.  Sometimes, when conditions are right, you don't have to choose at all.

Now for the next dilemma - should I walk or ride my bike the two blocks to the coffee shop?