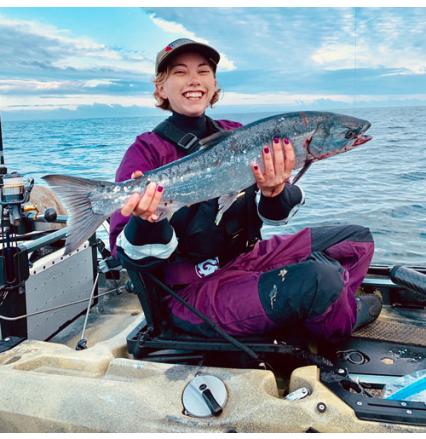 Is that title too dramatic? It seems like most of my conversations on the topic of ocean kayak fishing start with some iteration of “But sharks!!!” Remove the shark folks from the equation and we’re left with the remaining group who say something along the lines of “Take me with you!” That’s more my style, and while I have built up quite a queue of folks on the list of go-getters, my partner Mary got pushed straight to the front of the line when she decided that she was ready to chase after some pacific creatures in the kayak.

Mary has always been a quick study with fishing. For one of our first dates I took her fly fishing for the first time in one of my favorite local creeks, where she landed a variety of warm water species that would be impressive for any first timer. Shortly after I introduced her to saltwater fly fishing where she landed many speckled sea trout in the Gulf of Mexico. Within a couple of years she already had a respectable list of species that she’d brought to hand.

In 2019 I spent almost every weekend kayak fishing at Pacific City with a tight knit crew of salty veterans. By mid August the ocean had become reliably and unusually calm, and after hearing one too many stories about whale sightings, puffin visits, and cruising alongside Mola Mola, Mary could no longer stand the FOMO. I grabbed a demo Hobie Revolution 13 for myself and got Mary outfitted with my Outback - an ideal platform for someone who’s new to life beyond the breakers. The day itself began as most summer days on the sea do for a kayak angler; waking up when it’s still going to be dark for a few more hours, driving to the beach around 4:00AM, unloading gear, and setting up the kayak to launch at first light, all the while your stomach acid saying “I wasn’t ready to wake up yet. Why do you do this to me?” We dragged the boats down to the water as first light began to peak over the horizon and briefly counted sets. As our bows entered the surf zone, I reiterated the entry process with Mary. “Pull the boat in waist deep, then insert the drive and deploy the rudder. Once everything is ready to go just hop in and start pedaling!” I took my own advice and was out past the swell without a hitch with Mary hot on my heels.

If there was one thing I didn’t want to understate on this occasion, it was the fickleness of salmon. In the days building up to our outing, I’d told Mary multiple times, “You have to put in your time with salmon. Most people don’t catch one within their first few attempts. Many people take even longer than that.” I wanted to be sure that I didn’t create a day of disappointment by creating the illusion that salmon was a guarantee.

My buddy Don had helped Mary tie up a hoochie rig the night before to use that morning and given her some anchovies to use as bait - a healthy variation from the cut plug herring that I chose to run. When we reached the fishing grounds just outside of the haystack rock, Mary turned to me for instruction, “What should I do now?” I braced myself for the beginning of a day of trolling, hoping that I could help her find at least one fish. “Put the big weight on your line, then pull line from the reel to the first guide thirteen times.” She attached the sinker and started counting aloud. “1..2..3..4..” As she counted I looked down to cut a piece of herring and put it on my hook. “8..9.. Hey, is this normal?” I looked over to see Mary in the midst of a solid takedown.

Seconds into putting the line into the water in her first attempt at salmon fishing, and she was already hooked up! “Pedal! Pedal! Go go go!” I tried to shout the process for landing the fish, but even when you’re trying to do it yourself it’s a bit chaotic. Even amidst the confusion, Mary kept pedaling and the fish stayed on long enough to commit. “Okay, now pick up the rod, but keep pedaling!” Losing a salmon because you let up too soon is one of the worst feelings. It’s not uncommon for them to get away even when you’ve done everything right, but if they get off the hook because you made a mistake, it feels so much worse. It was also the most powerful fish Mary had ever fought, and by a significant margin. She kept the pressure on as I made my way over to offer support. I came up alongside her as she brought the fish closer to the kayak. Remarkably, only minutes into her first attempt at salmon fishing, Mary had the fish next to the boat and ready to net. I gave her my net (we only had the one to share) and in one effortless motion she slid the net under the fish and pulled it right in with the rod. The salmon, clearly shocked by the situation, began thrashing in the net before it could leave the water. Mary held on tight and let the fish wear itself out. The next thing I knew, she had it in the boat. A perfect, quite dandy sized hatchery coho - incredible. She dispatched the fish and put it into her Icemule.

After taking a few minutes to recover from the complete insanity that had just transpired, Mary put another anchovy on her line and we took back off. It was only a few more minutes before she was on another fish, once again bringing it to the boat like a seasoned professional. This one was a jack chinook, and was promptly released to swim another day. At this point I determined that I had chosen the wrong bait, and switched to a hoochie rig with anchovies for myself. Shortly after I was rewarded with my own hatchery coho.

We trolled around for a couple of hours until boredom started to set in, at which point we decided to take a little break and do some jigging.

We headed over to a productive reef spot far from the crowds at the rock and dropped our jigs. It wasn’t long until we found ourselves on top of a school of rockfish. Mary was the first to hook up, landing a small China Rockfish, which at that point in time was not legal to keep. Even so, it was a cool fish to see and another species brought to hand. Shortly after she hooked up again; this was clearly a larger fish than the last. The joy of saltwater jigging in the Pacific Northwest is, in my opinion, primarily due to the fact that if something is putting up a decent fight on the other end of the line, it could be one of many things. It could be a huge rockfish, a healthy lingcod, a monster cabezon, a halibut, or a salmon that just saw the jig on it’s way down and got hungry. It could also be a harbor seal, a salmon shark, or even an octopus! The more time you spend fishing in this environment, the easier it is to tell what you’re bringing up just by the way it acts. Sometimes I envy people who are in the exact position that Mary was in at this moment, with absolutely no idea what could possibly be on the other end of her line.

The ocean was incredibly clear on this day, and after a few short runs we could see the color of the fish coming up from the deep. Flashes of red and orange, which could be some kind of sculpin (earlier that summer I’d caught a cabezon with the same coloring), but was more likely a rockfish. As the fish came closer, I couldn’t help but be a bit surprised. It was an absolute specimen of a Yelloweye Rockfish! Yelloweye are rather uncommon along the Oregon coast in shallower areas like the reef we were fishing. So uncommon that this was the first one that I had laid eyes on, and it was huge! Mary brought the fish up for a quick photo op and then sent it straight back down. Luckily we were in shallow water, so the rockfish had not experienced barotrauma that may have occurred in deeper water. It swam off without a hitch.

We meandered from reef to reef, coming up on schools of rockfish here and there. Mary landed a nice cabezon, making it her fifth new species of the day and her second fish in the bag. I had picked up a cabezon, two healthy ling, and a black rockfish for myself. After seeing a couple of gray whales and a few puffins, we decided to call it a day and head back in for some rest.

Typically surf launching and landing are the hardest parts of kayak fishing in the ocean. Launching I find to be more of a thrill with less risk. Landing on the other hand can be quite tricky as the waves are coming from behind you and fishing kayaks can be a bit wiley when forced into a surf. Fortunately Mary had made a great decision in the conditions for her first ocean fishing extravaganza, and we came back into the protection of the cape to find it nearly as flat as a lake. Two clean landings, a solid days catch, some majestic creature sightings, and no seasickness. It was no surprise that Mary decided to pick up a Hobie Revolution 13 shortly after this outing, and now takes every chance she can get to chase the swimming critters of the Pacific with me. 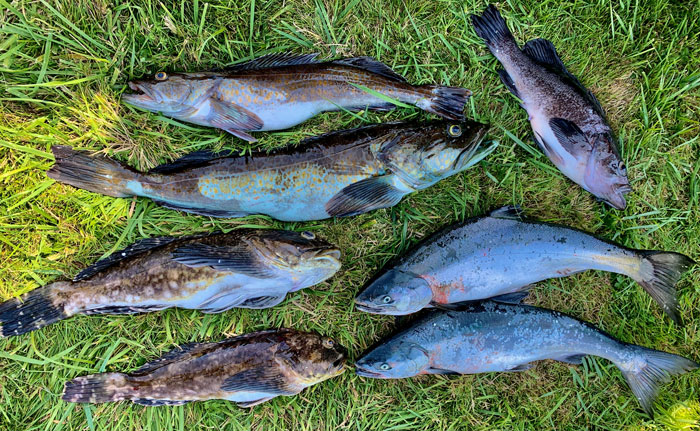