The Dirtbag Adventures: Episode 5 - surfing, romance, and other tales of ineptitude 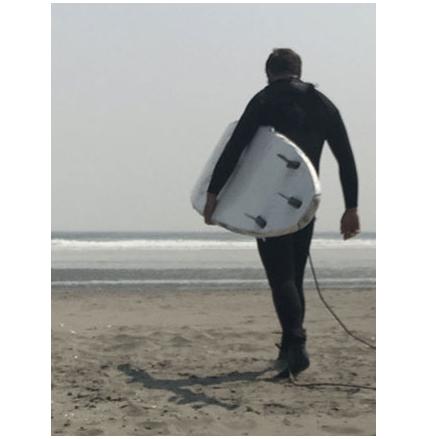 The Dirtbag Adventures: Episode 5 - surfing, romance, and other tales of ineptitude

In this blog Matt discusses a sport at which he's painfully novice: surfing. He hopes you can learn from his mistakes and do a bit more research before trying new and dangerous activities, and offers some romantic fare in hopes of balancing out his tale of ineptitude. Keep up with all of the Dirtbag Adventures here.

I am not a particularly strong climber, but I do consider myself an experienced climber. I've climbed many styles, in varied conditions, with a plethora of partners. I don't climb the hardest or most complex routes, but I know enough to know when I'm in over my head.

But this isn't a climbing story, this is a story about surfing.

A few weeks ago, I went surfing with my girlfriend, Casey. We'd each been a couple times, years ago. This was also going to be the first time for us surfing together, without experienced friends to point us in the right direction.

At first everything was fine: we found a mellow section of beach with only one other surfer nearby; a salt-and-pepper dad showing his kids the basics in the white wash. We paddled out quickly and easily in the spot where the waves seemed smallest. When we got past the breaks we turned around and practiced balancing seated on our rental boards for a few minutes, just enjoying the beautiful sea. 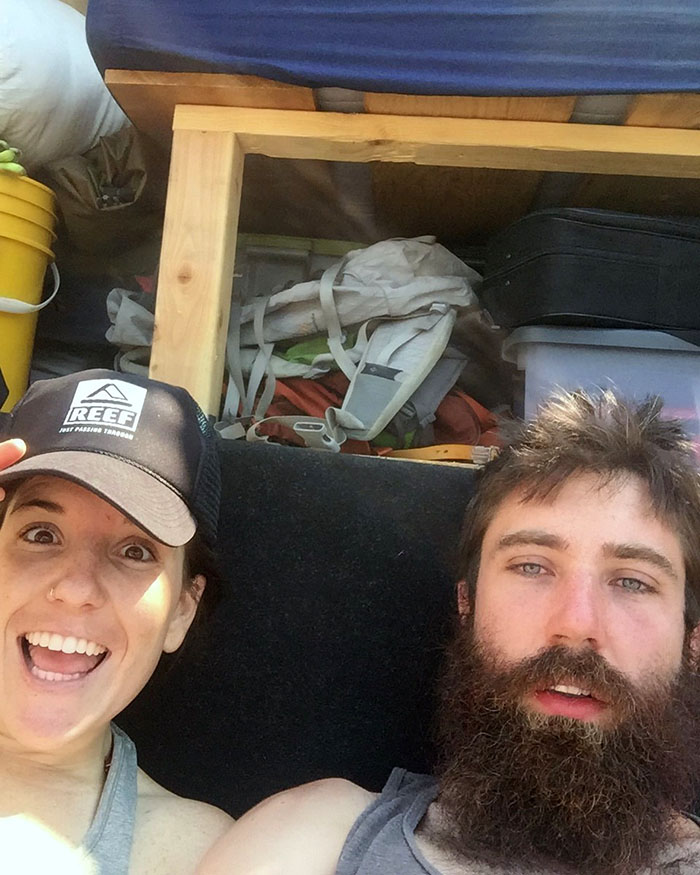 Surfing makes me tired, but somehow Casey always has more energy. Here's us back at the van after a comparatively calm day of surfing in Westport, WA.

Before long we realized we were quite a bit further out than intended. We had no hope of seriously surfing waves, but waves would help carry us in as we clutched our boards for dear life. Now we were too far out, where the waves were just swells, so we started paddling straight back in towards shore. Neither of us are any good at paddling, but it seemed a lot harder than when we'd paddled out ten minutes before. I wrote off the added difficulty up to being tired and inefficient, and just kept working at it.

Casey was little further back than me, and struggling. While I'd rented a nine-foot foam board, she was on a seven-and-a-half foot fiberglass board and was having trouble keeping it pointed straight. I was probably two hundred yards from the beach, and she was behind me. I pushed hard, paddling as smoothly as I could. When I took a short rest, I looked back at Casey: if I’d paddled twenty feet, she was thirty feet further away. “Common” I yelled, more harshly than I intended. She responded like a sailor, and I knew we were both beginning to worry.

My mind switched gears. In climbing, the first step in a crisis is to take a moment, assess the situation, and make a methodical decision. The principle is the same in any emergency, but the ocean doesn't have as much patience as a stone cliff. I took two or three deep breaths, pointed my board at an angle so I was paddling in and along the shore towards stronger waves, and paddled my guts out.

Going into this I knew a little bit about rip currents, but not enough. We'd paddled right into one out of ignorance, and were fighting it now. Once things got hairy, I wasn't able to remember all the key details, but I knew that if I moved parallel to the shore it would help. So, I paddled up the beach and in at an angle, and before long I was clutching my foam rental board and belly-surfing a wave all the way in. As the wave petered out I stood up and ran into shore with all the energy I had left.

When I got to the sand, I turned around and looked for Casey. She was still out past the waves-and struggling. It looked like she'd made no progress at all.

If it had been someone else out there I could have more easily have taken purely logical steps to address the situation. But when the love of your life is in danger emotions have a strong upper hand on logic. Casey isn't just a friend, she's the person I've built my life around. Back in our van I had an engagement ring hidden in the pocket of a pair of pants, and I'd planned to propose to her this weekend at the ocean.

In the back of my mind I was already torturing myself for leaving her out there, even though I knew Casey is a far better swimmer than me, and that I would certainly have made her situation worse if I'd stayed in the water. Next step Matt, next step. I forced myself to act as calmly as possible.

I ran up the coast looking for the surf dad we’d seen earlier, hoping he'd know something about the currents or be strong enough to go after her. He was nowhere to be seen. I looked up and down for anyone else surfing or in any way able to help. All I saw was a couple retirees walking along the shore, enjoying the beautiful weather.

Next step Matt. I rushed to the van to grab a cell phone. I was guessing there was a coast guard or other rescue team nearby, and while I imagined it would be a long time until they would arrive, it might be the only chance we had. I grabbed the phone and ran a hundred feet back to the top of the beach, hoping to spot her. If Casey was still getting pulled out I would call 911.

Luckily, she was in the safe zone. Well within the braking waves and standing up, the ocean was only coming to her waist. I was so excited I jogged back to her, grinning wildly as she flopped down on the sand next to her board. I joined her on the ground, both of us panting for breath. 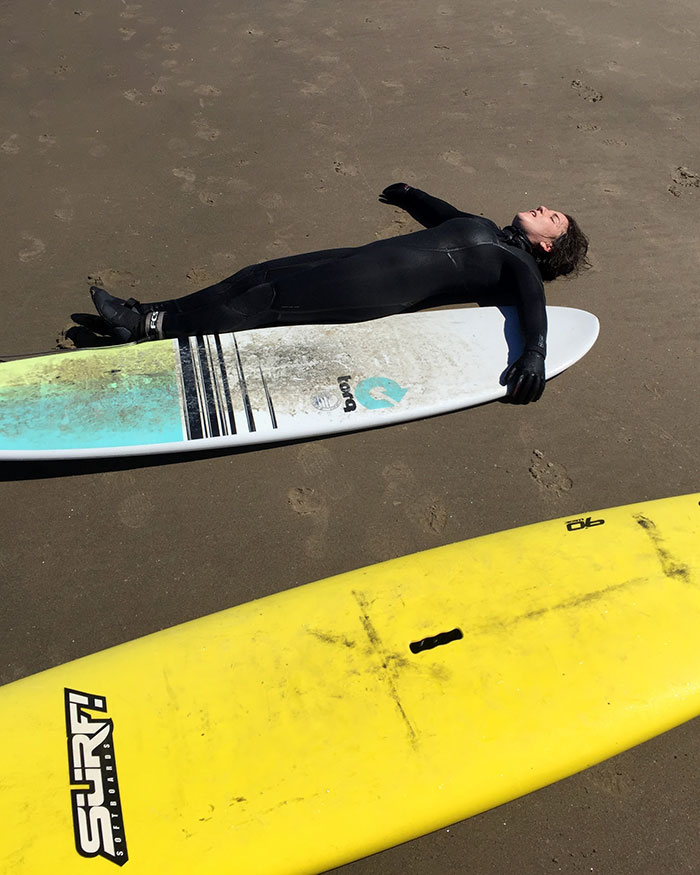 Casey catches her breath after a scary day on the Oregon coast. Oswald State Park, OR.

After a moment, I asked her some questions, trying to make sure she was alright. It turned out she was never nearly as scared as I was. She has encountered currents before, and felt safe on the board, she's just gotten in a poor position and it took some time for her to work her way out. I was also forced to face a massive contributor to my fear: that I didn't know how over my head I was. In most of life, if something gets bad I know how bad it is. In surfing, with my limited experience, I had no idea how bad it was, or wasn't.

I had originally planned to propose to Casey in the ocean, on surfboards, with our new foray into this terrifying sport serving as an analogy for the exciting journey of bringing our lives together. Instead, I asked Casey to marry me on a rocky beach along the Nehalem river where we camped, just the two of us. A safe, intimate place seemed more fitting. She said yes. 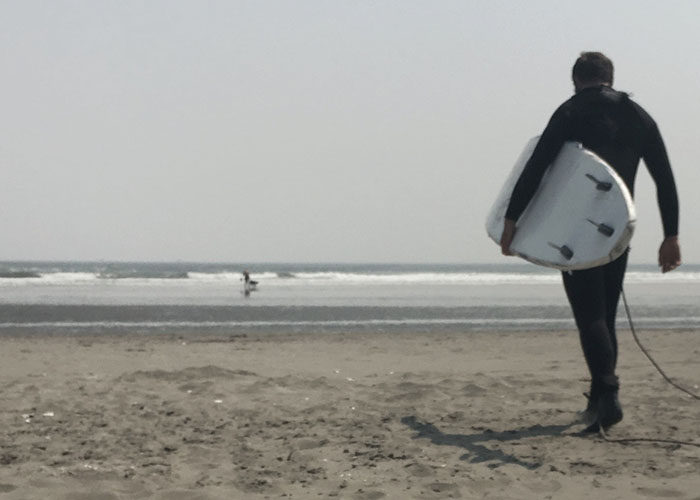 Me going surfing the week after our scary day at the coast, this time in much calmer and better-understood waters. Westport, WA.

There is a terrifying, new, mysterious form of love, and there was a time when Casey and I were engulfed in it. It's the kind of love where you don't know if you're in over your head. But it's different now. I love Casey in a very visceral, emotional way, but also in a calm, reasonable way. She's my summit bid and my basecamp. She's that hold I'm scared will slip, and the bommer bolt just below that will catch my fall. She's both frighteningly new and as familiar as home, all at once.

I've been out surfing again since that day, and while I'm still awful at it I'm learning a lot. And I intend to keep learning. Casey is my fiancé now, and together we keep learning, and pushing each other, and being a safe space for each other. And honestly, there's still moments where I feel too inexperienced, but she's always right there with me, learning with me, and helping me out when I get in over my head.

Read all of the Dirtbag Adventures!