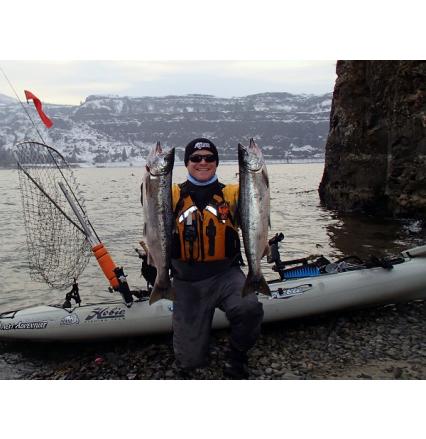 --When, Where, Conditions--
When: November 16th, 19th
Location: Mouth of the Klickitat River, on the Columbia River
Conditions: Mid to upper twenties, 5-10 mph winds with gusts up to 20 mph. Clear water, 50 degrees, ~1.5 mph current.
Duration: ~ 6 total hours for two days

The Report: This year has been the best year for coho salmon on record, by far! One spot that has been hot lately in particular has been on the Columbia River around the mouth of the Klickitat River. Several kayak fishermen have been taking advantage of this spot in the past month and I stopped by a couple of times to bag some fish last week. The biggest complication with fishing this spot lately has been the weather. Last week saw morning temperatures in the low to mid twenties and daily highs barely pushing the freezing mark. Throw that in with the ever present winds of the gorge and you've got quite a sporty fishery.

The first day was Sunday the 16th. Myself and a couple of other kayak fishermen splashed the kayaks at around ten and quickly found out the bite was hot. I picked up my first fish on my first pass along a shelf that had a pile of fish stacked up along it. Not a big one, but a bright fish so in the bag it went. 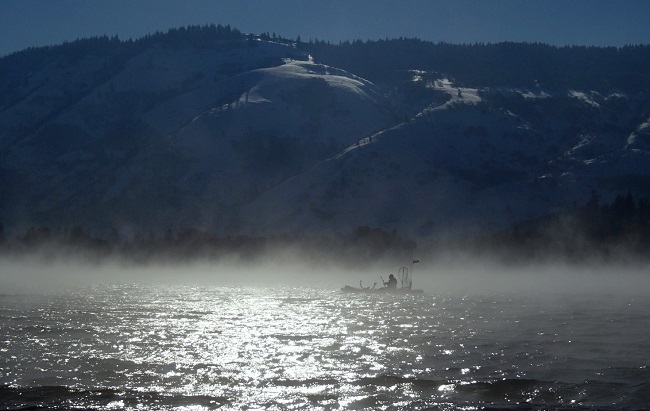 Frigid temperatures on the river.

The others started picking up fish in short order. The wind was howling, which made it difficult to fish, but we persisted and all found our limit of 2 coho each. Overall we were on the water for less than two hours. 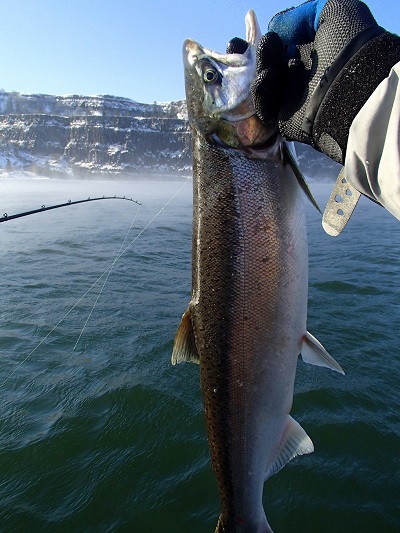 My reel was coated with ice and I had a couple of nice icicles forming on my rod holder. 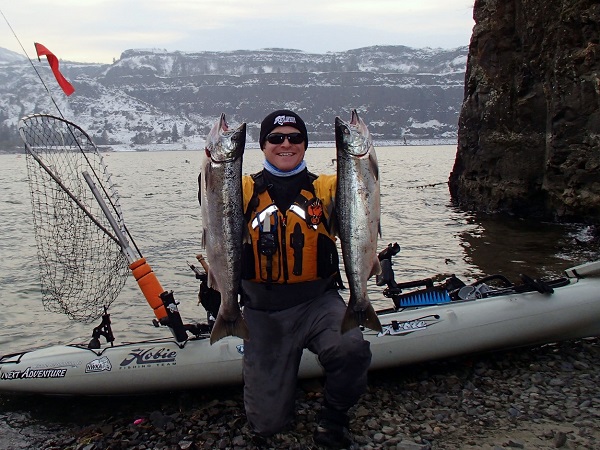 Yes!
Since the bite was so hot, I took the following Wednesday off of work to get back out for more. The fish were right where we left them and just as aggressive. The temperature and winds were more cooperative than they were on Sunday, but not by much. From 10am until 3pm I caught about a dozen fish and had at least a bite on almost every pass I made. I was able to cycle through and find some nice bright fish to keep among those caught and released the rest. About half of the fish I caught were starting to get some color to them, but for mid-November and almost 200 river miles from the ocean I was impressed by how bright some of these fish were. All were caught on a trolled spinner with a cured prawn. I also caught and released a beautiful native steelhead that was about 15 lbs.
Many are saying this spot should continue to produce fish through November and possibly into December. This area has certainly made it onto my list of go-to spots!
Share
Tags: Jeff Anderson, kayak fishing & Trip Report
Prev Post
Next Post