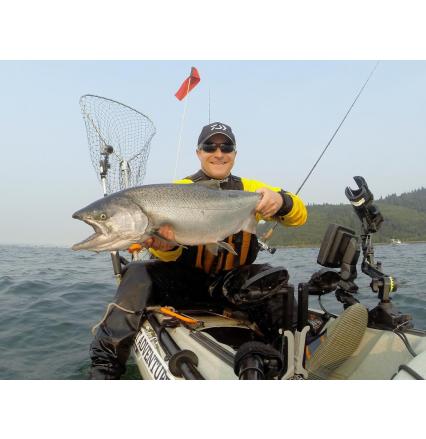 Every year thousands of people descend on the Astoria, Oregon area for some of the best Chinook salmon fishing the Northwest has to offer. Named after the westernmost deadline of the fishing area, the Buoy 10 fishery is quite a sight to behold. It involves strong currents, unpredictable weather, an astounding amount of boat traffic, and, of course, plenty of salmon. Until recently, it was very rare to see a kayak fisherman out in the mix among the powerboats here, but that has changed over the last couple of years. I recently spent four days in late August fishing this area with several other kayakers and we did very well.

I arrived at about 6am to see plenty of kayak transport vehicles parked at a dirt pull-off along a highway at a spot that has come to be known as The Shipwreck. Named after an old hydrofoil ship that was abandoned nearby along the shoreline, this spot on the Columbia River is a great place for kayakers to put in. I tried to set up as quickly as I could but with so many good friends around lots of chatting was inevitable. The wildfire smoke made for a beautiful sunrise both Saturday and Sunday! 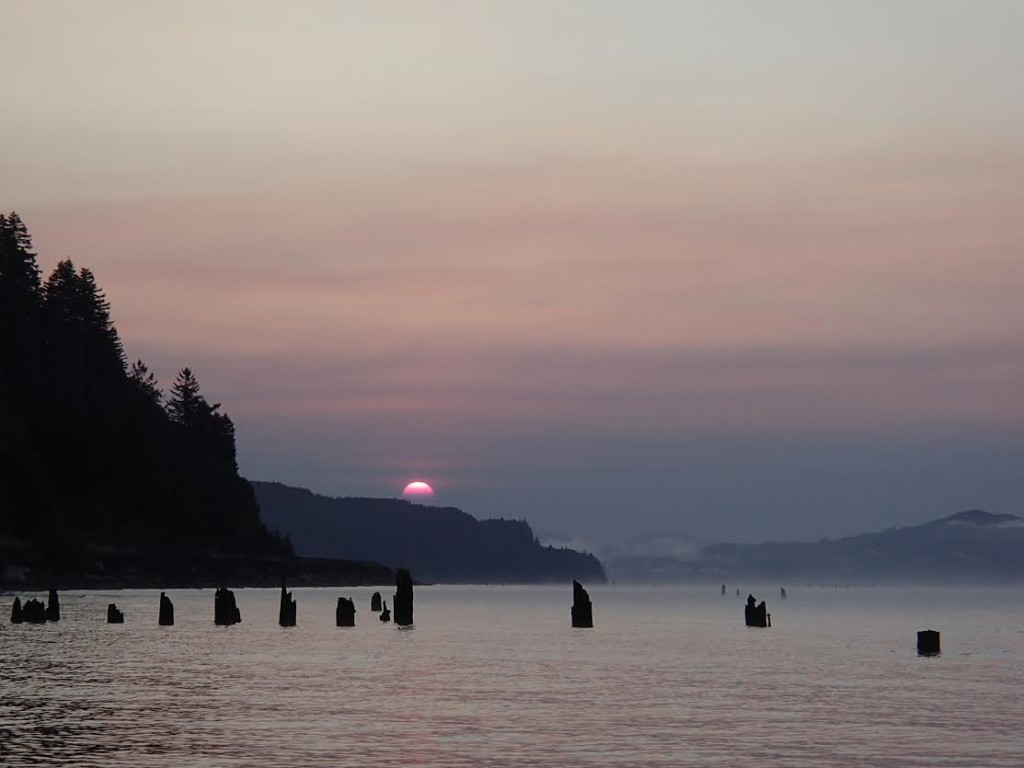 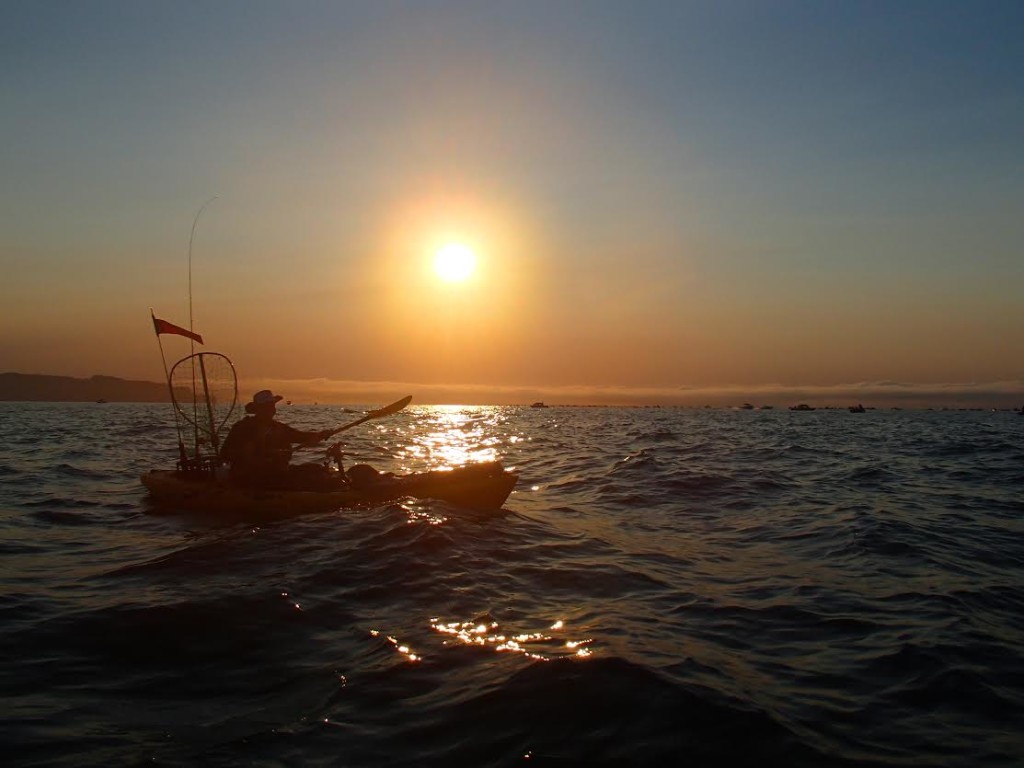 I pedaled out hard to the head of my favorite drift in this spot and saw plenty of powerboats hooking up – it was tough to control my excitement. I had my line in the water for only a few minutes on my first pass when my rod tip buried down into the water. This fish took my line counter from about 40 ft. to over 200 ft. very quickly. After putting up a hefty fight I had a chrome 20 pound upriver salmon in my net. It wasn't even 7am yet and I had filled my Chinook limit for the day. 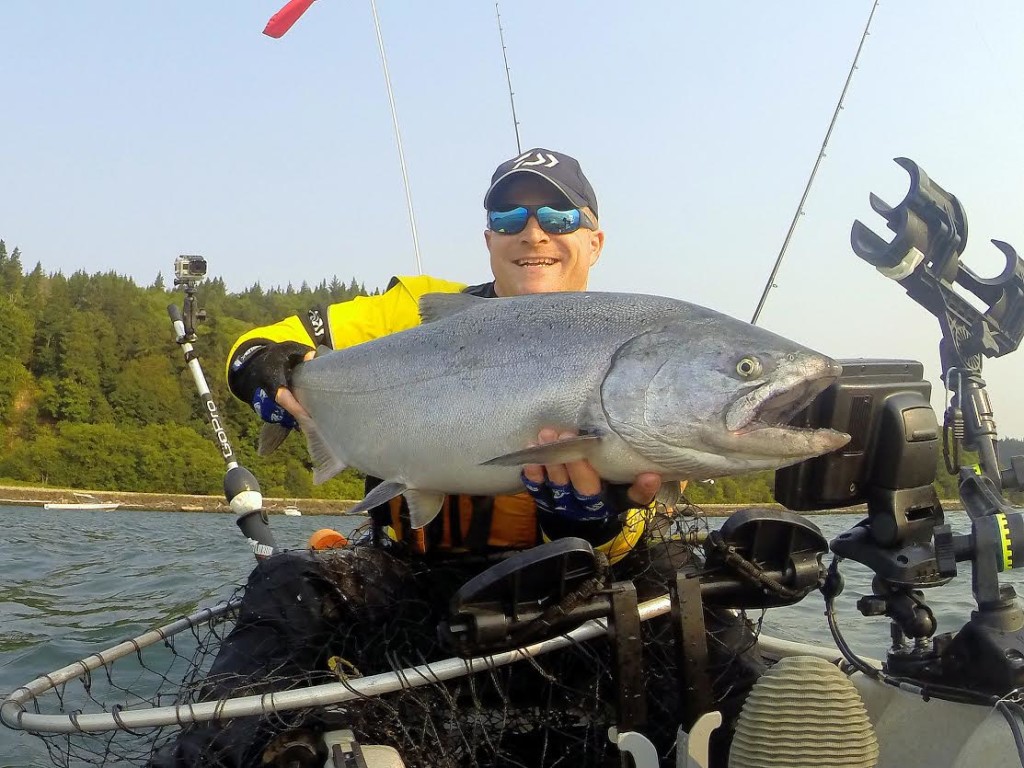 I spent a couple more hours cruising around trying to find a coho salmon to complete my daily limit but there just weren’t many around. Lots of chinooks and few coho is typically the case with the neap tide series in the Buoy 10 area. Once the spring tides come back, so do the coho. After packing up I headed over to Fort Stevens to set up camp and get ready for the next day.

Saturday had us at the launch a bit earlier than Sunday since we didn’t need to drive from Portland. Again I pedaled hard out to the same spot to set up my first drift. Hundreds of powerboats were working the area again but from what I could see not as many of them were hooking up as I sent my line down. I had a solid take-down less than a minute into my drift but it didn’t stick. At the end of my second pass I get another solid take-down that I fight for a few seconds before the fish gets off the line.

An hour or so later in the morning I finally connected with my Chinook for the day. I was making a troll against the current as it was approaching slack water and the take-down happened just as a powerboat with a couple of curious guys pulled up near me to check out my setup. They stuck around and watched me fight and land the fish. 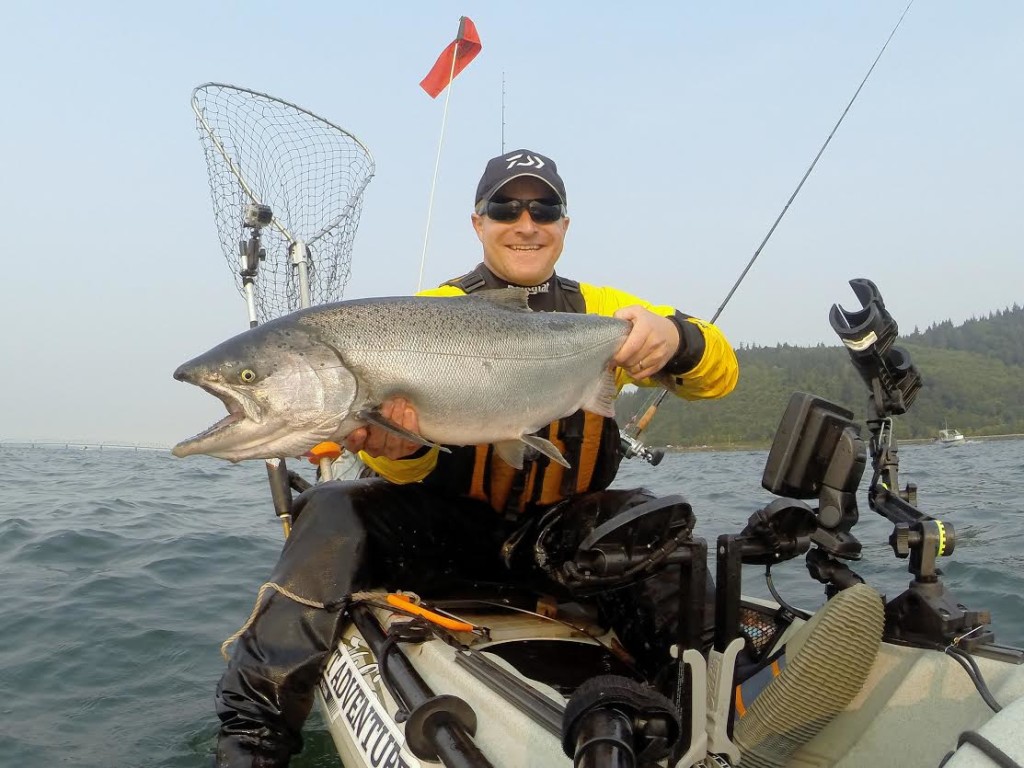 I then proceeded to try and find a hatchery coho but again failed to find one. Overall Sunday seemed to be the slowest day of the four, but it was still better than most other salmon fishing days I’ve seen. The amount of boat traffic on Saturday and Sunday really needed to be seen to believe. The constant flow of boats flying by to reset their drifts turned the water into a washing machine set to agitate. Thankfully, my Gore Tex Meridian drysuit and Bahia Tour PFD made me feel safe and comfortable. 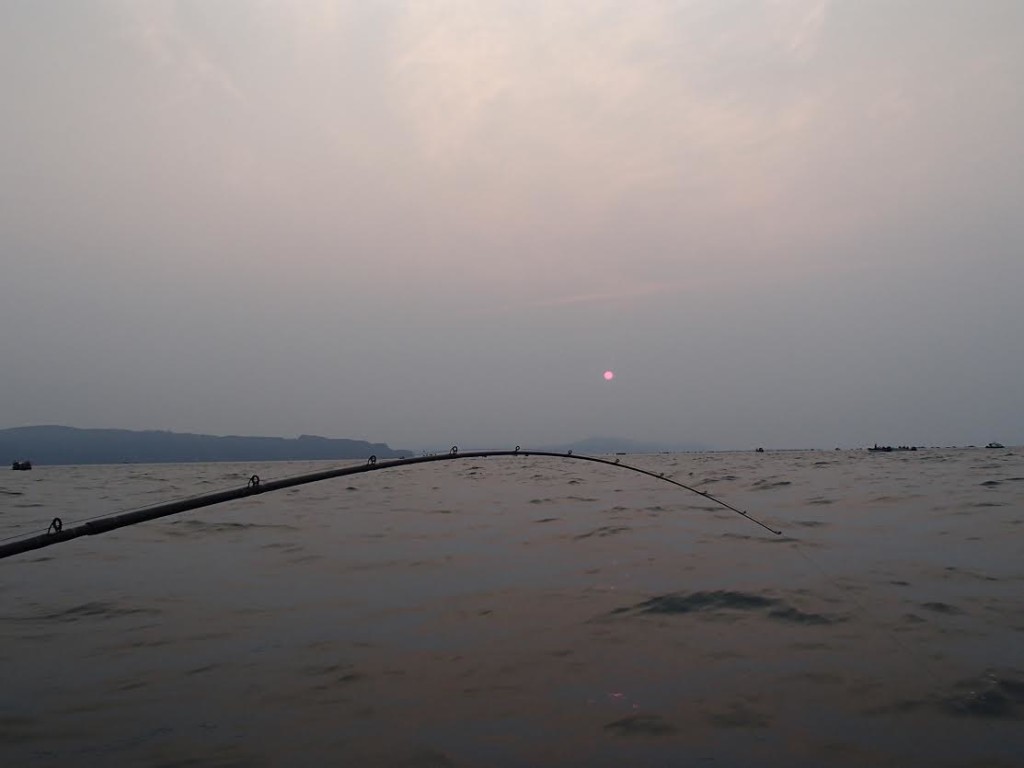 The fishing regulations had changed as of Monday and native Chinooks were no longer allowed to be kept. This meant we were going to have to work a little harder to find Chinooks we could keep but given the mix of hatchery and native fish our group of kayakers had caught over the past couple of days it didn’t seem as though it would be too tough. The first pass of my usual spot lead to a great fight with a beautiful native Chinook that was around 15 pounds. After quickly releasing that fish I setup the drift again and this time hooked into a nice, bright hatchery Chinook, also in the 15 pound class. Luckily, I had filled my Chinook limit pretty early in the morning again. Brian Steves, one of my kayak fishing buddies for the weekend, easily found a beautiful 22 pound hatchery fish that ended up being the biggest fish to hit the cleaning table for the trip. Later in the morning I was able to pick up a small hatchery coho so I was finally able to head back to the launch with a full daily limit. 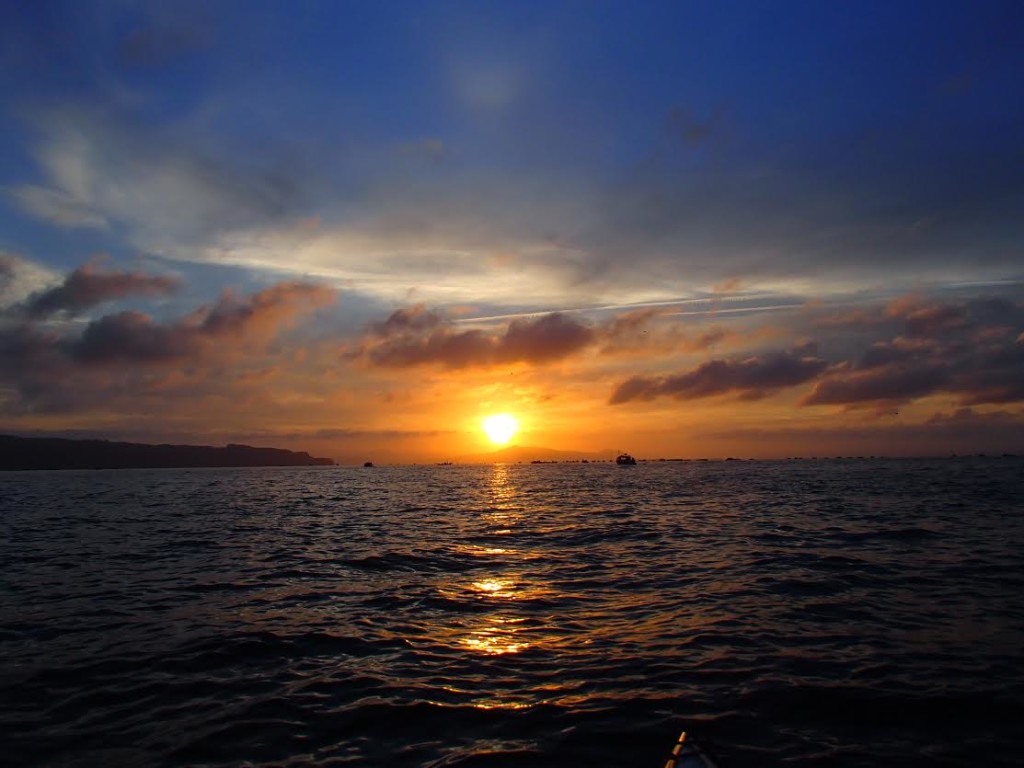 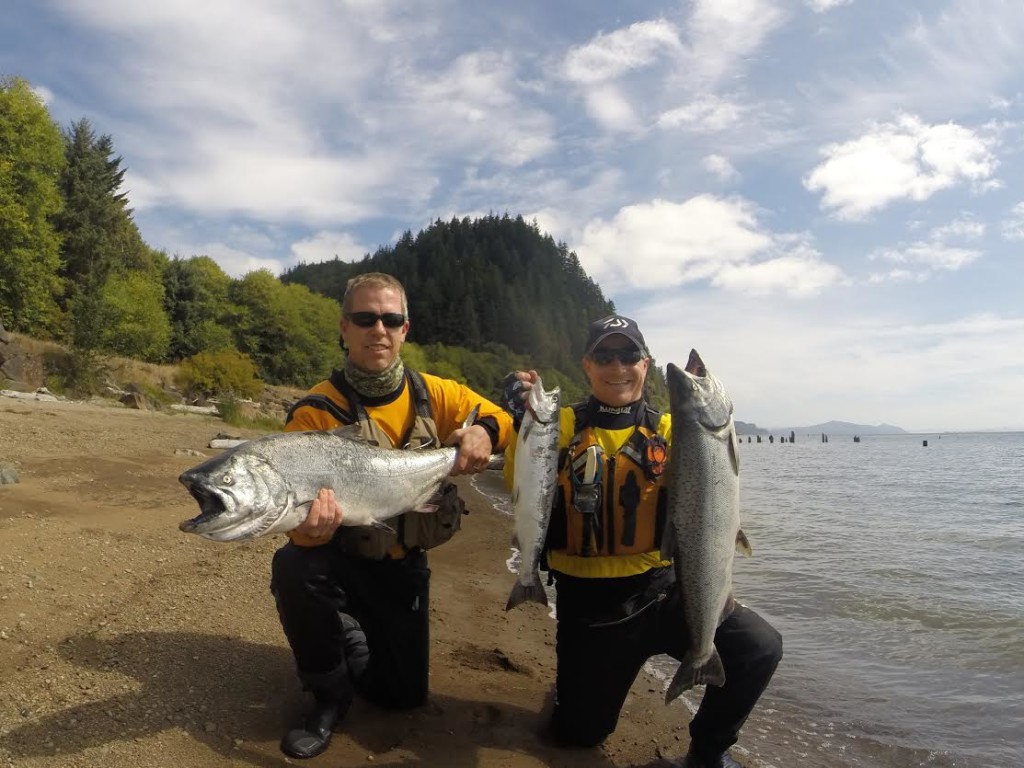 For my last day of the trip we were faced with the same challenge as Monday: sort through Chinooks until you find a bright hatchery fish. This would prove to be a bit more challenging for me on Tuesday. Additionally, the incoming current was going to be stronger on this morning than any other morning of the trip. All the more reason to find my fish as early as possible. I was able to get on the water a bit earlier on Tuesday morning so I was starting my first pass before the sun was up. This first pass resulted in a small, lower river hatchery fish that was already getting dusky so back into the river it went. The second pass produced only a take-down that didn’t stick. My third pass (around 7:30 am) produced a bright native fish in the 15 lb class that was quickly released. 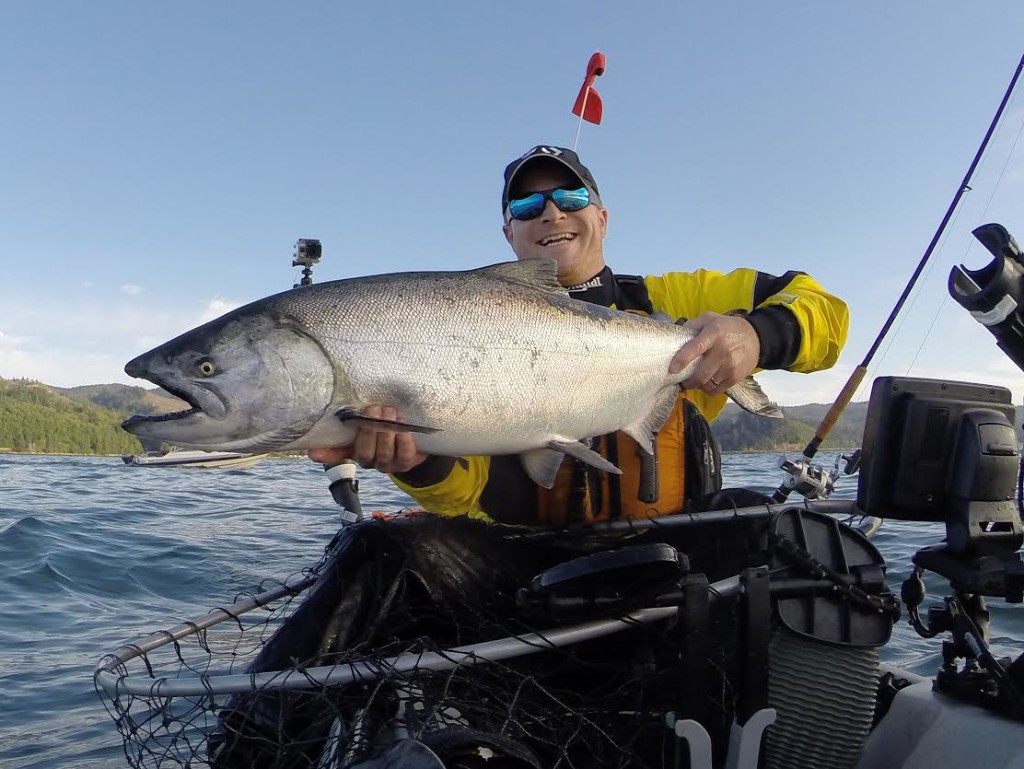 At this point in the morning the current was really starting to get going. I was drifting with the current at over 3 mph, which meant that pedaling to reset my drift I was only going about 2 mph. A few minutes into this next pass my rod buried and as I started to turn on my gopros, line began screaming off my reel. After less than about 20 seconds my reel had over 300 feet of line out. I was thumbing the spool to try and slow this fish down while trying to turn and chase it to keep it from spooling me. After starting to chase it down I quickly caught up to it though because conveniently it turned right around and swam right back towards me. After about a ten minute fight I had a gorgeous, bright, native salmon in my net that probably was around 25 pounds. 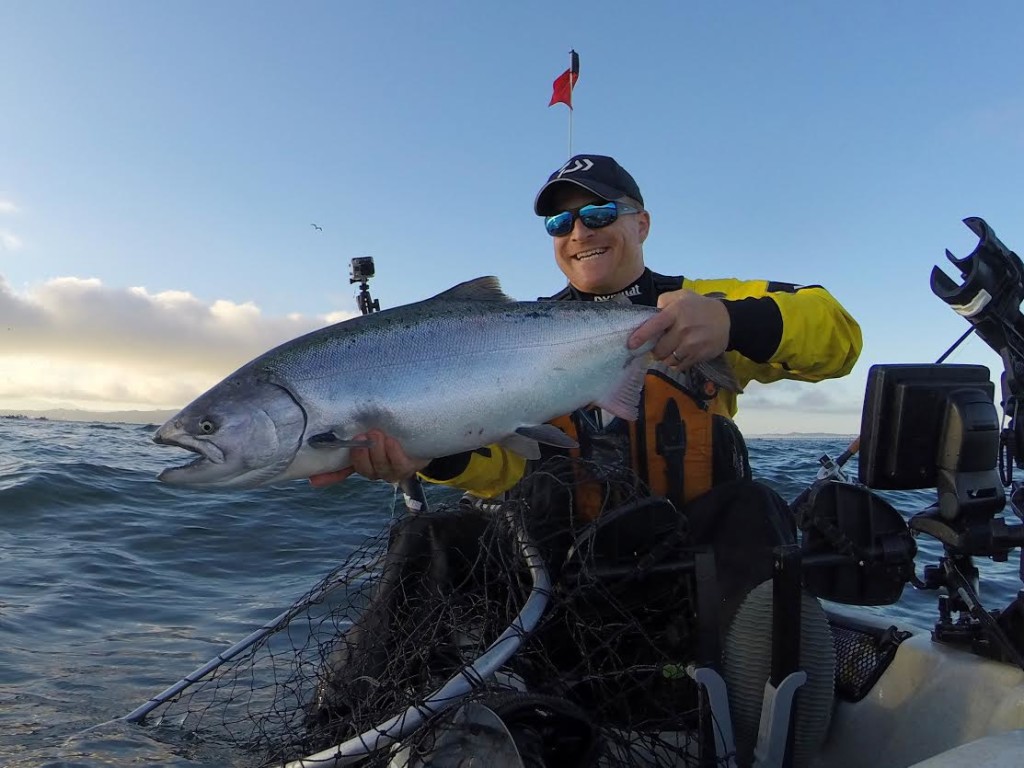 After releasing this fish, I began to realize I was really starting to wear out. My arms were burning and my legs were growing tired. I was determined to get my fish though and the bite was better than any other day on the trip. About an hour and a half passed of battling the current when I noticed a small nibble on my line that lasted for a few seconds and quickly disappeared. After almost a minute, the nibble came back for a few more seconds, and then was gone again. Around a half minute later I was pretty astounded as the nibble came back for a third taste. This time, however, the fish finally hooked itself and the fight was on. After what was a relatively short and uneventful fight I had the reluctant biter in the net. Luckily, I had finally found my fish for the day as it was a bright, hatchery Chinook in the 15 pound range. 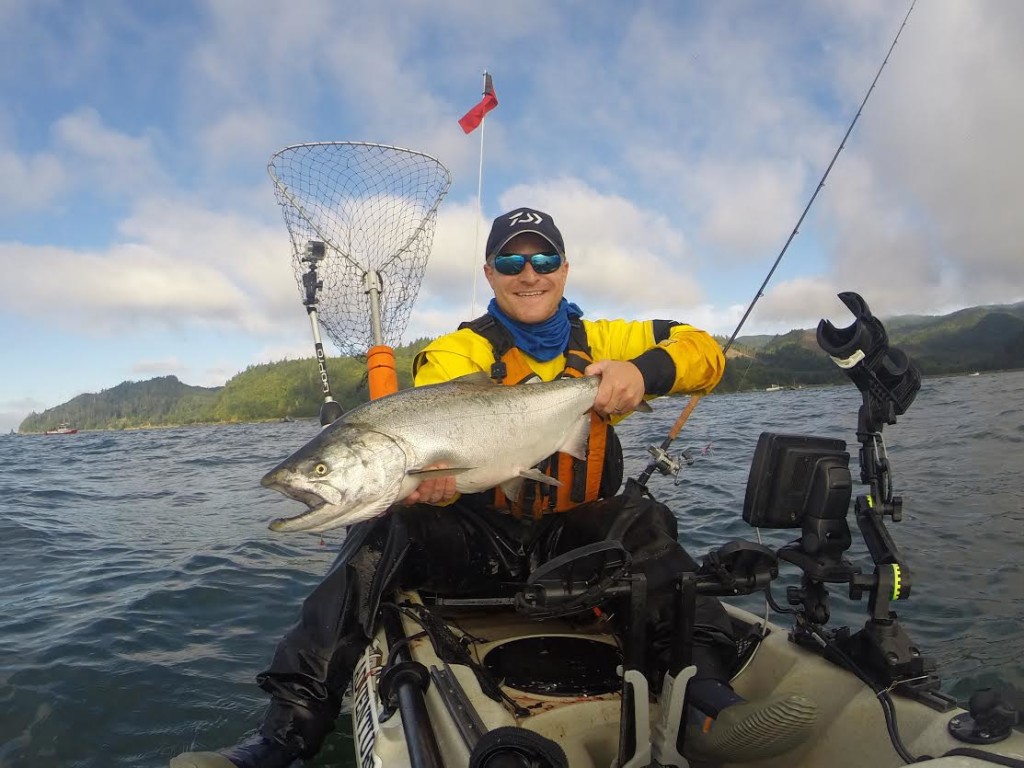 I headed back to the beach where a couple other kayakers who had caught their fish earlier were packing up. After snapping some pictures I packed up and headed back to Portland. What an awesome trip! 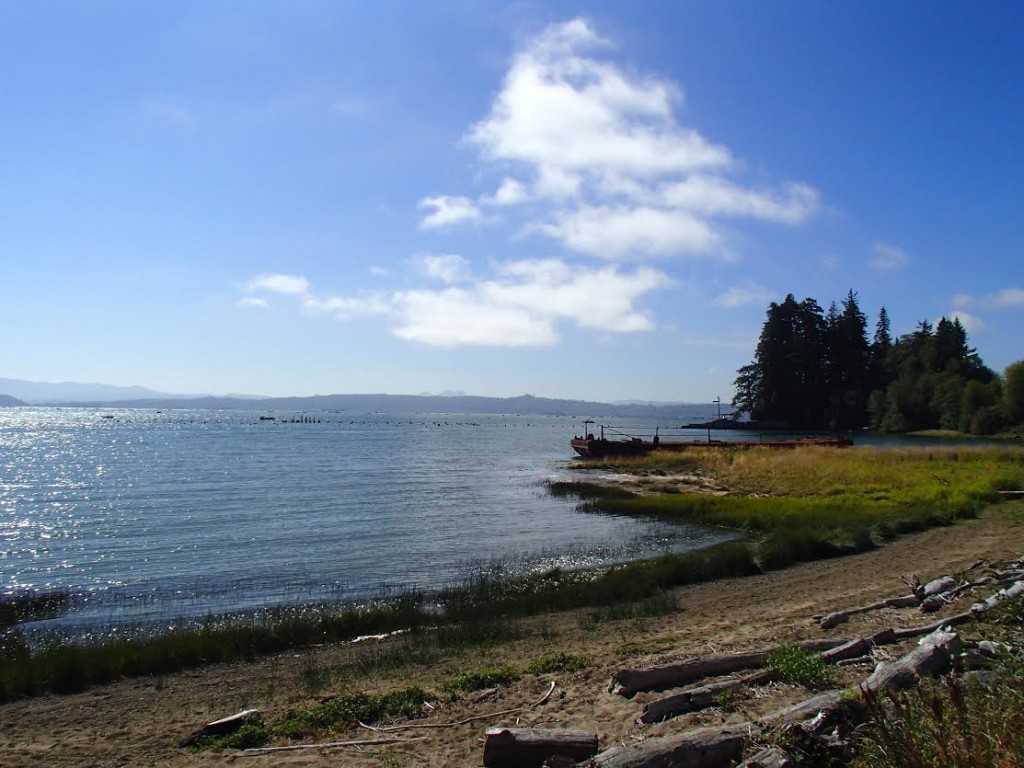 Lewis and Clark stayed near this spot for 7 days while pinned down by a nasty November storm soon before their trek to the Pacific Ocean was completed. They named the spot Dismal Nitch because of how miserable their stay was. They probably would have named it something better if they were here for the Buoy 10 salmon season in August!