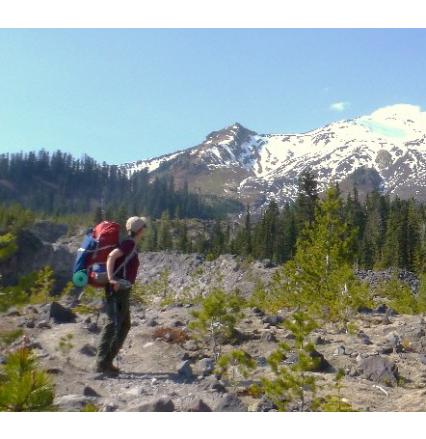 Snow has been falling at lower elevations this Spring than practically all Winter, which means there's more snow in the Cascades.  Sure, sure, the balmy summery weather we have been experiencing in the Northwest the last month or so sure seems to be a harbinger of Summer, but the paltry snow on the Cascades peaks is now deeper and lower than all winter long.

These elements combine to create a juxtaposition of conditions which result in both good glissading on Mt. St. Helens (specifically), and (nearly) snow-free hiking trails at higher elevations throughout the Northwest.

The snow won't last long, however.  Snow was falling below 4000 feet elevation this past week, but Summer is certainly on its way. Alpine wildflower are already beginning to bloom. The mountains will not be very white come July. 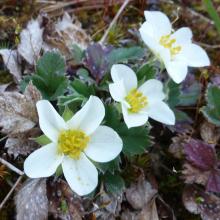 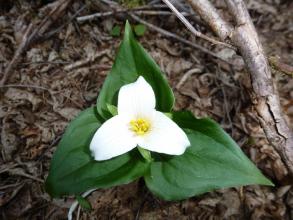 The Loowit Trail is the round-the-mountain trail for Mt. St. Helens. It circumnavigates the volcanic peak, deeply wooded on the south side, and a barren alien terrain on the north side's blast zone.

It will be thirty-five years on May 18 since Mt. St. Helens erupted and blasted off its top 3000 feet.  A tower of steam and ash rose miles into the sky, and fifty-seven people lost their lives, mainly to the unexpected lateral blast and lahars which swept down the north-side valleys.  Several eruptions over the next month sent ash east and west.  Portland was spared from the first eruption, but dusty ash eventually coated the city, limiting highway and air traffic.

There have been a few periods of renewed volcanic activity, particularly with a burst of earthquakes, steam eruptions and massive dome building in the 2000's.  But Mt. St. Helens is mostly quiet today, slowly rebuilding its dome in its deep north-side crater, and re-establishing vegetation and faunal communities in its blasted areas. You can witness nature being reborn here.

You need a permit to climb Mt. St. Helens, but it is easy to get online. There is a climber registry at the trailhead (Marble Mountain Sno-Park until April/May, and Climbers' Bivouac until October/November), but you must get your permit before you head to the trailhead.  One hundred people per day are permitted to climb to the crater rim.

The secret is that you don't need a permit to enjoy the alpine wonders of Mt. St. Helens. This year, with the low snowpack, most of the Loowit Trail is already available to hike (many years it could be July before the trails melted out).  You can hike to 4800 feet elevation (the entire Loowit Loop Trail) without a climbing permit.

Because of the 1980 blast, even the relatively protected south side had its glaciers melted and timber line pushed below where it was.  Following the winter climbing / Swift Creek / Worm Flows route takes you through remaining stands of mountain hemlock and true fir forests to the raw, exposed, and open plateaus of the new timberline pushed down by the blast. 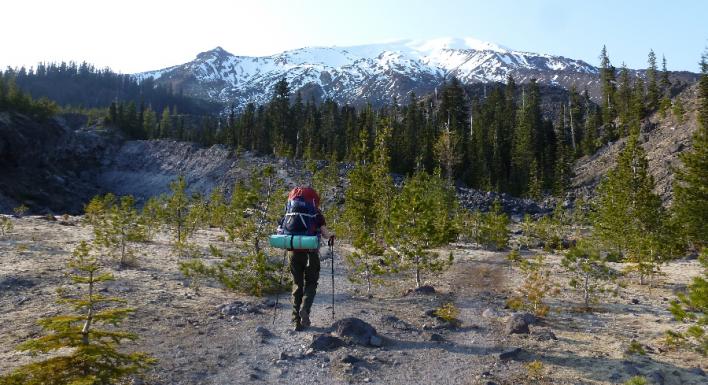 From the Loowit Trail, the broad crater rim fills the sky.  Young pines sprout up where nothing dared to grow for twenty years after the blast.  The views are incredible, and you can follow the progress of climbers as they slowly ascend and then rapidly return via glissading, skiing, or snowboarding.

The worm flows are a feature from a geologically "recent" eruption of lava from Mt. St. Helens, which left long, sinuous ridges of basalt on the mountain's south face.  The summer route up Monitor Ridge from Climbers' Bivouac is a straight shot, but the winter route winds its way up the mountain along broad curves.

I was up on Mt. St. Helens late April during a particularly warm and dry spell.  Without even summitting, Mt. Hood and Mt. Adams were clear and present.  We camped near the Loowit Trail at 3800 feet elevation, on a broad plateau with views of the mountain and a big, starry sky. 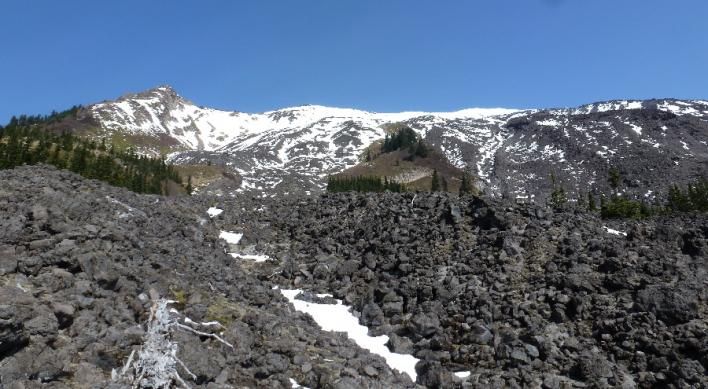 Not having to hoof it to the summit allowed for more exploration and enjoying the timberline / subalpine habitat. We followed the Loowit Trail up to where snow appeared on the trail (on a north face near 4200 feet elevation), and scrambled out on the dark basalt blocks to sit on a bleached log and admire the mountain views. 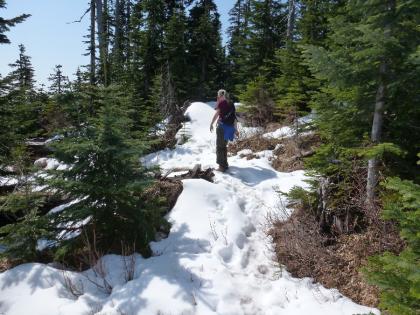 Back in camp, we pulled out the binoculars and followed the progress of climbers that had passed us that morning.  Up the basalt ridges, up the steep snow fields, and eventually they were tiny dots atop the crater rim.  It had been hours since we had seen them, but we would see them again much sooner than that.  Those that had hauled snowboards or skis to the summit were the first to return, but those that relied on glissading still made good time and passed by us before dinner time.

It had only been about two and a half miles to pack into camp, so we had brought luxury camping items and enjoyed a gourmet dinner as the sun set and the stars came out.  It was a spectacular night - we left the rain fly off the tent (good old Wilderness Technology Denali 2!) to see the rotation of the night sky and the passage of a bright moon. 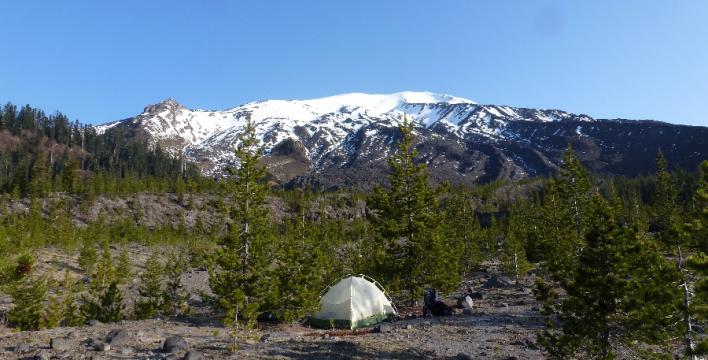 We lounged in camp the next morning as long as we could.  There were not nearly as many climbers passing us along the trail.  The hike out was all downhill, but we paused at the timberline and took in the majestic volcanic views before we plunged back into the forest toward the trailhead.

Swift Creek, which usually flows part of the day was not flowing at all.  There was just a big dusty cliff where Chocolate Falls should have been.  There won't be much snow this summer, and streams and springs may dry up - so be prepared and carry extra water with you.

Next Adventure Outdoor School is in the permitting process to offer day hikes and overnight backpacking trips to Mt. St. Helens and the Gifford Pinchot National Forest this summer.

Stay tuned to our Outdoor School and calendar for new trips offered to Mt. St. Helens.

Next Adventure Outdoor School also takes you on regularly scheduled trips to Mt. Hood National Forest, the Columbia River Gorge, and the Oregon Coast.  Experience the natural wonders of the Pacific Northwest with Next Adventure!

We can even create a custom trip adventure just for you or your group! 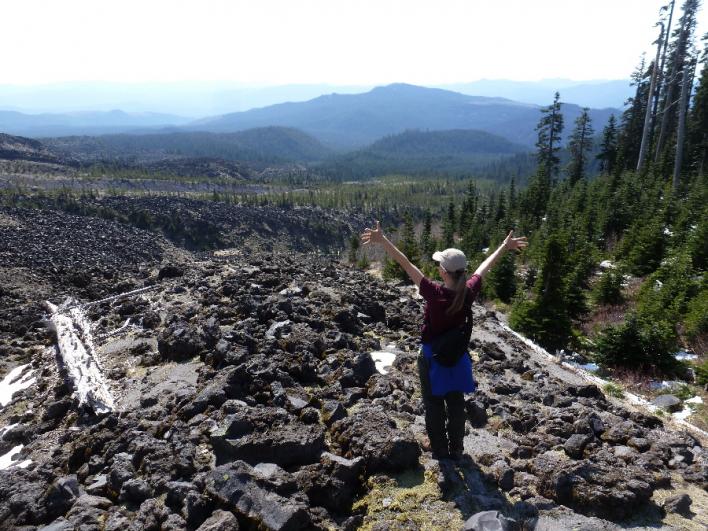