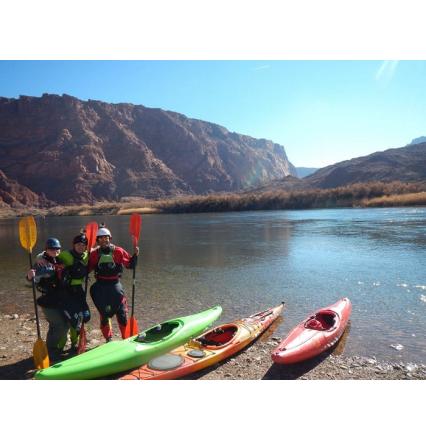 --When, Where, Conditions--
When: January 17th-27th 2015
Location: Lee's Ferry to Pearce Ferry
Conditions: Beautiful and sunny, but freezing at night.
Duration: On average we paddled 25 to 30 miles a day.

--Helpful Info--
Difficulty: All of the rapids were straightforward and the water was big and fun. Some of the side hikes were steep; it would be fun to go back with some trad gear and do some climbing.
Kid Friendly? Yes if on a raft.
Pet Friendly? Animals aren't allowed in the Grand Canyon 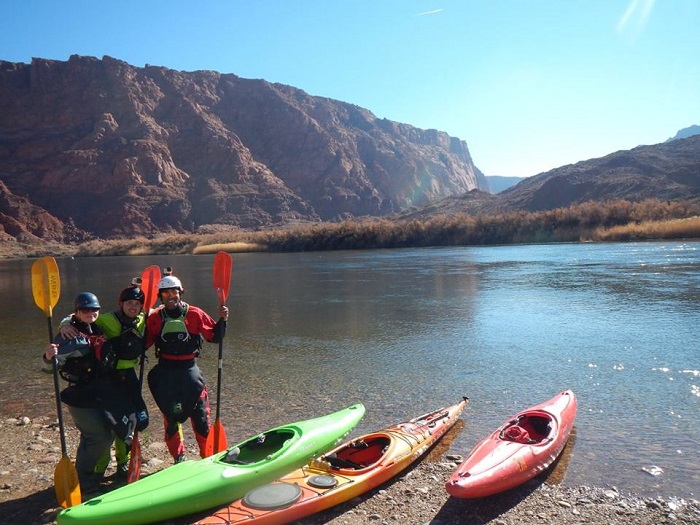 2 weeks before: Patrick puts a hole in his brand new drysuit at the put in of Canyon Creek. Lisa from Northwest Sewing fixes the suit very quickly. Thank you Northwest Sewing!

A week before: Patrick gets recirculated in a hole on the North Fork of the Washougal and loses a shoe. Patrick buys 5.10 Water Tennies!

Two days before: Patrick realizes the fire pit is mandatory in the winter time and builds a fire pit in a day using a sawzall and other borrowed tools from Next Adventure. $200 dollars later we had the heaviest piece of gear that was only used once on the trip, but if you need a fire pan you can borrow ours or Patrick still has enough metal to make another one.

The night before: Mayah calls Patrick and tells him she has a hole in her radiator and she is going to JB weld it.

The day of: We have a brand new radiator. Thank you Vo’s Mechanic Shop in Gresham!

Ten Minutes in the drive: Mayah forgot her paddle.

Six hours in the drive: We hit a storm in the Wallowa’s and our speed is reduced to 25 mph. Mayah nearly loses control a couple times, but we prevail. We see numerous crashes on the interstate.

Twenty three hours in the drive: We have finally made it to Lee’s Ferry!!!

During the Inspection: Mayah forgot a mesh screen as required by the park service. Luckily the ranger gave us a filter and let us go!

Day 1, January 17th: Lee’s Ferry-river mile 0 to Indian Dick-river mile 23.2, 23.2 miles. We didn’t have a screen for the filter the food as required by the National Parks Service (Mayah forgot it), we made one out of a Sierra Nevada can, but the ranger thought it was a good try but not enough. He left and came back 20 minutes later with a kitchen sink screen (we still have it in our sink). Had first taste of big water and House Rapid was legit! Had a campfire and went to bed 8.

Day 3, January 19th: Nankoweap-river mile 53, to Below Nevilles-river mile 76, 22.1 miles. We made it to the confluence of the Little Colorado and the Colorado. The water turned brown, rapids got bigger and filtering the water became a little more complicated. We met a group of biologists doing research on fish in the Grand Canyon. Met Canadians from BC Sean, Abbey, Bryce and Andrew. Mayah almost got stuck in a hole at the end of the day, but was able to surf out of it. 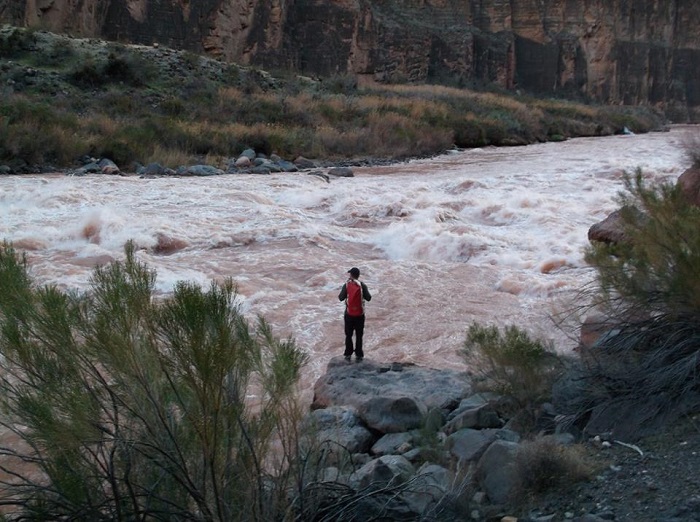 Day 4, January 20th: Below Nevilles-river mile 76, to Emerald-river mile 104, 28 miles. Awesome day with some big rapids. Mayah swam in Hance lost one of the maps and was a mental wreck and she wanted to portage all of the rapids, but we met the Canadians at Phantom Ranch and Adam offered them some smokes and they offered to put Mayah’s boat on their raft and escorted her through the rapids (cigarettes and other forms of tobacco are currency on the canyon). We camped with them at Emerald and they were very hospitable feeding us a spaghetti dinner with salad and we had a fire and camped with them.

Day 5, January 21st: Emerald-river mile 104, to Talking Heads-river mile 133, 29 miles, Met a guy Chris from Flagstaff who does a 30 day trip every year in the winter. We stopped at Elves Chasm and went for a day hike and washed off our gear in the clear water.

Day 6, January 22nd: Talking Heads-river mile 133 to Tuck Up-river mile 165, 32 miles, We passed halfway point at mile 150 and stopped for celebration. Mayah’s dry bags have been chewed through by mice and a quarter of her food was contaminated. Checked out Deer Creek and Havasu Creek. The water in Havasu Creek was bright blue and a nice change to the dirty brown Colordo. 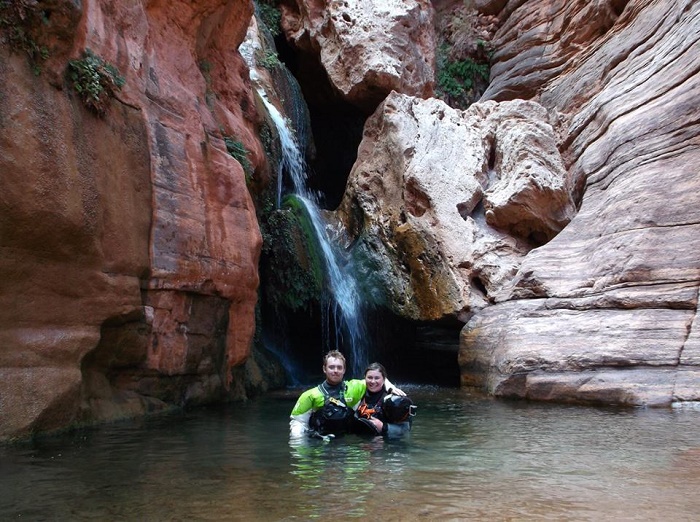 Day 7, January 23rd: Tuck Up-river mile 165 to Lower Lava-river mile 180, 25 miles, We ran Lava the crux of the trip! I got stern squirted out of a big hole. We celebrated after running Lava. Mayah portaged on river right which sucked. Next time no portaging or if you portage go on river left. Mice have also eaten through Mayah’s dry bags and a good portion of our food is inedible.

Day 8, January 24th: Lower Lava-river mile 180 to 205 mile camp, river mile 205, 25 miles, Mayah and Patrick switched boats. Mayah lost the map so the rest of the trip was the same as John Wesley Powells. We had no idea what was coming next!

Day 9, January 25th: 205 mile camp-river mile 205 to 24-river mile 242, 37 miles We stopped at Diamond for a birthday shot! We met some rafters at Separation Canyon and realized we’d traveled farther than we’d anticipated. Mayah lost both the maps so we had to ask people along the way where we were. Since Separation Canyon was already taken we paddled on a few more miles to camp at a small side canyon. 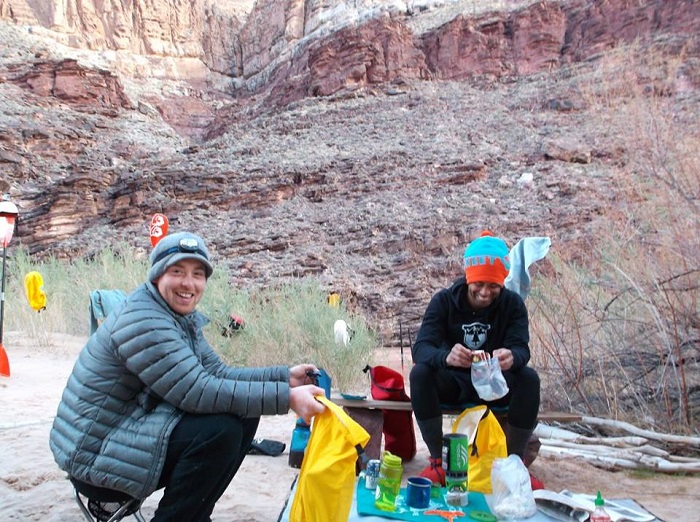 Day 10, January 26th: 242.7 mile camp to Dry Canyon mile 264, 21.3 miles A flat water day as we descended out of the Canyon. The walls opened up gradually as the waters slowed and become dirty with trash and discolored floating foam piles. We met some rafters who’d been out for 30 days. They endured the snow from New Years and told us where we were and about their trip. They gave us the best tasting boxed wine and caramel candies we’d ever tasted. We came around a bend and came in to a constant stream of helicopters taking private trips to the Canyon- a strange sight after 10 days with no contact from civilization. We again paddled further than we meant to and found a small platform with a cave that looked like it would stay dry through the night. It had great climbing and bats in a twisting cave. Campsites space out to about every 10 miles beginning after Separation Canyon.

Day 11, January 27th: Mile 264 to Pearce Ferry Take Out-river mile 279.4, We woke up planning to complete the trip that day. We’d originally planned our trip to last 12 days but after all the flatwater and adventure of the last few days we were over it and decided to stomp out the last 21 miles of flatwater and Pearce Ferry Rapid in one shot. Because Lake Mead has been slowly dropping in levels over the last few decades the side walls have become exposed. They are covered with invasive Tamarisk and eroded, dry soil. The walls randomly fall into the river with a sound like a bomb going off. A few minutes after setting off in the morning one of these bombs went off next to me releasing a 10ft swath of dirt and dust in to the river. Within an hour we reached Pearce Ferry take out, I spotted Mayah’s car- the shuttle company dropped the car early. This led to celebration since we no longer had 17 flatwater lake miles to cover! We enjoyed take out beers and loaded up our gear in the car. We scouted Pearce Ferry Rapid which turned out to be the biggest rapid of the trip. After a cheers we rolled out to cross the desert home. Not before stopping at a hotel for a shower and jacuzzi sesh. 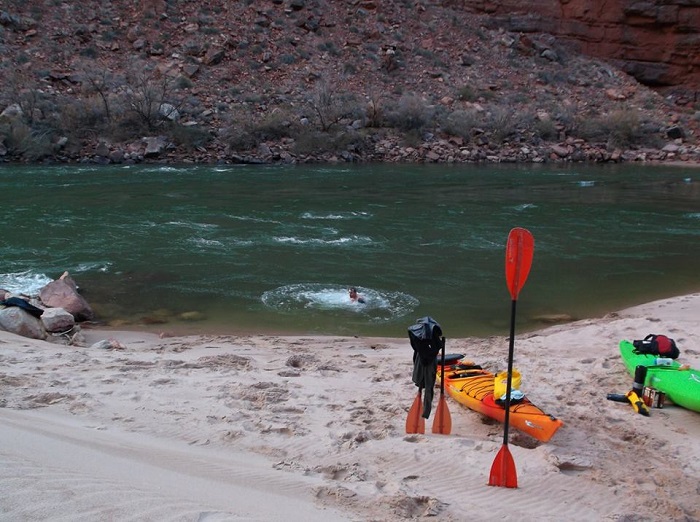