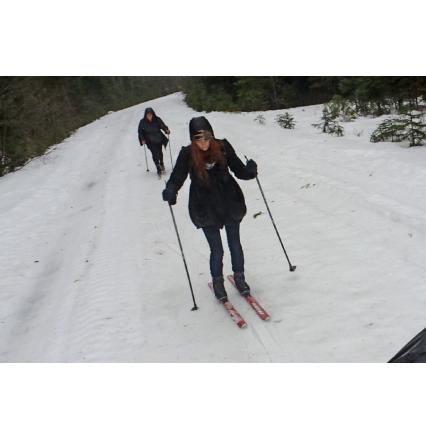 Participants on the Next Adventure Outdoor School cross-country ski and snowshoe tours this past weekend got to see the variety that Pacific Northwest mountain weather has to offer.  Snow dumped at all elevations when the big arctic blast came through the week before.  While the snow may have melted away on the streets of Portland, a solid snow base remains at higher elevations.  Tours went out both Saturday and Sunday, but conditions were quite different each day. 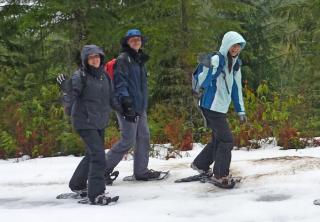 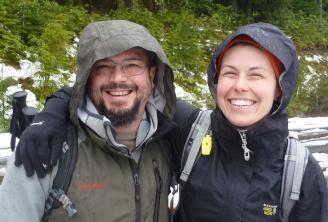 - 2/15 Snowshoe and XC-Ski Day Trips -
Saturday's tour had plenty of snow to ski and snowshoe on.  Warming temperatures and rain had consolidated the snow.  The forest was green, stark against the white ground.  No new snow adorned the branches of the towering conifers.  Bare pavement was visible on the road at the trailhead, but just up the hill, the snow covered our path to several inches.

The soft, wet snow allowed for good control for the xc-skiers.  Both groups followed the road up aways, but the snowshoe group headed up a spur to the ridge for some views of the Roaring River Wilderness, ridges and valleys swirling in and out of view between the clouds.

Most of the tour was a walk or glide through the clouds, but the grey skies did rain on us now and then.  But we were prepared with raingear and dry insulating layers to keep out the damp chill.  The skiers covered about 5 miles round-trip.  After a quick lesson, we were on tour most of the time.  We paused to practice some skills, like side-stepping up a hill, and riding out a long downhill run.  It was slow and steady, gradually climbing as we went out, and then a faster run back downhill.

Deer and elk tracks in the snow crossed our path several times.  The stillness of the deep woods and the muffled quiet of snow was interrupted only by the sound of skis or snowshoes shushing along. 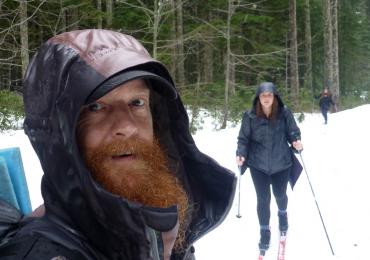 The snowshoe group returned to the trailhead ahead of us, and Josh was ready to serve up hot cocoa and cider.  It was a quick hop back to Portland, with warm memories of being in the woods, exploring the winter scene. 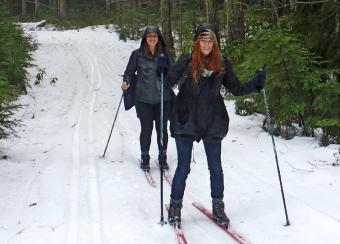 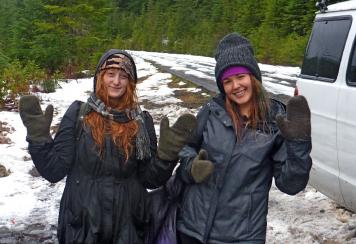 - 2/16 Snowshoe Day Trip Tour -
Sunday's trip should have been the same according to the weather forecasts, but we found three fresh inches of snow on the ground and the trees glazed white at the trailhead.  Plus, it was actually snowing as we got out of the van, got geared up on snowshoes, and started the tour. 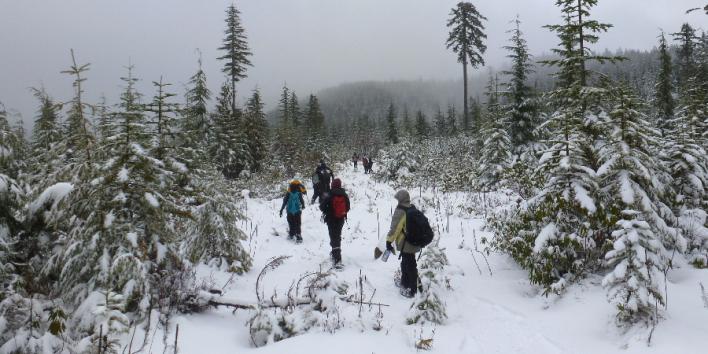 The snow was a bit thinner under the big trees, but as we climbed the hill, it got deeper.  At one point, the trail became a stream for a few dozen yards, which provided an extra adventure to hop from side to side.  It is quite a feat to hop on snowshoes!

We reached consistently deep snow and took a break in an open area.  Julie made a snow(shoe) angel. The sky was bright enough that most of us put on our sunglasses, and it had stopped snowing. 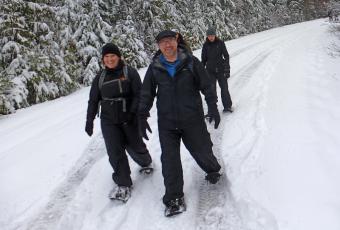 We ambled along untracked spurs to some viewpoints and wandered through the snowy landscape. 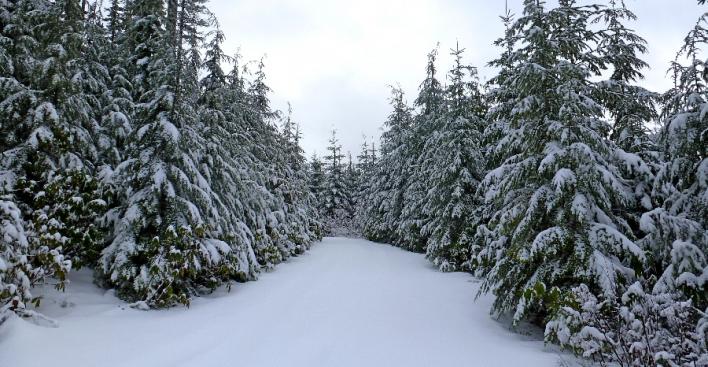 Douglas squirrel tracks crossed our path again and again, as well as some rabbit, some canine, and what looked like might be a bobcat that followed the path for some time. 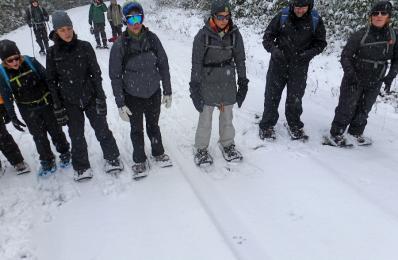 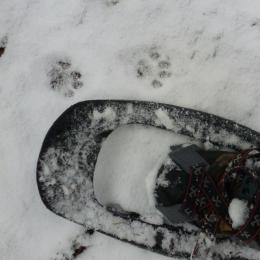 From the viewpoints, we gazed out at vast expanses of forested ridges and valleys, green covered in white, with clouds dusting the far ridges with fresh snow.  After our second lunch stop, participants were offered the option of taking a shortcut back to the trailhead, or continuing on a longer loop tour. Everyone chose the longer route, so we continued the loop. 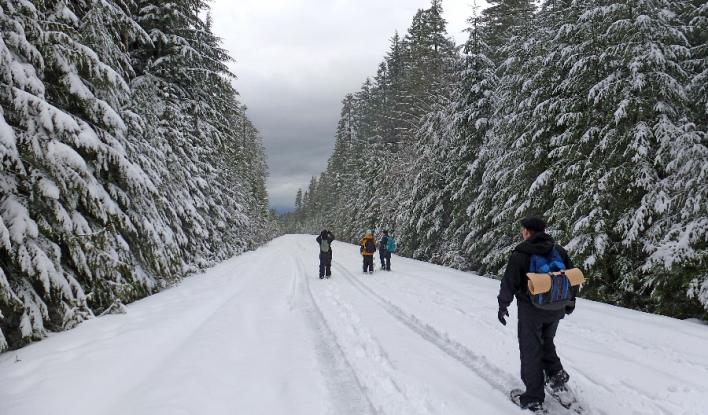 It started snowing on us again as we reached the trailhead.  Drew and I stashed the gear, but no one was in a hurry to leave.  We stood around in the lightly falling snow and recounted the experiences we had and the memories we had made that day, sipping cider and cocoa, sharing with new friends found on the trail.

More Winter Trips -
The snow is still falling at elevation, and Next Adventure Outdoor School has more trips scheduled to take you to the snow!

And our first hike of spring is scheduled for the first day after the Vernal Equinox, March 21.  Join us for a hike to see the earliest desert flowers bloom in the eastern Columbia River Gorge.

Plus we've got a full summer of hiking and backpacking trips planned to take you out into the great outdoors of the Pacific Northwest!
Find out more online at nextadventure.net/outdoor-school.

See you on the trail!

- Greg Hill is Lead Guide and Program Manager for Next Adventure Outdoor School.  Contact him at outdoorschool@nextadventure.net if you have a question about a trip, or would like to schedule a custom tour. -