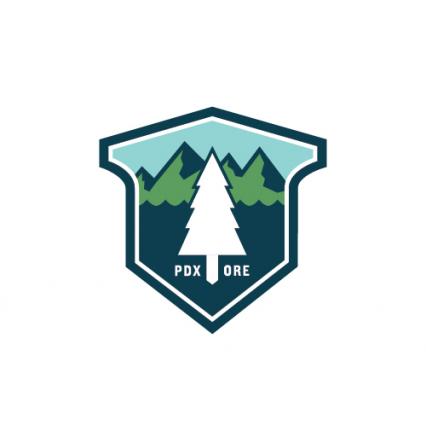 Some of you may have noticed we haven't posted in over a week. Well, partly that was due to Ohio, Indiana and Illinois being REALLY boring (no offense to anyone from those states). I try to stay present and find something beautiful in every place...and day after day of cornfields will get to anyone. Partly it's due to the challenge of timing. When we do arrive in a town with a library, it's usually either not open, or it's too early or late for a break.

Our short foray into Illinois began with what we thought would be an 80 mile day into Chicago, where Adams friend Darren lives. Late morning the clouds in the NW started to turn dark, and Adam remarked that it looked like there was going to be a thunderstorm. 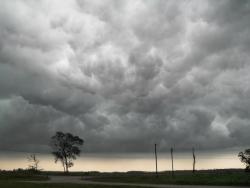 I thought we could make it to the next grouping of houses, which looked to be about a half mile away. Before we could get to those houses, the wind picked up quite suddenly, nearly knocking us off our bicycles, and it began to rain. There was a barn (of course, we were still in the middle of cornfields) which we ran over to, with the wind whipping dirt and sand into our eyes. Luckily the barn was unlocked, so we were able to pull our bikes inside just as the downpour began. The picture shows the clouds right before it started pouring. Being from Oregon, it's easy to think we know rain. However, I have only seen rain like this on a few rare occasions in my life, and it was amazing the speed with which the storm built, arrived, and spent itself. As the last of the thunder faded away, we got back on our bikes and enjoyed the momentary cool brought on by the storm.

I don't remember if it was due to getting lost, miscalculation, or using google directions, which are always wrong, but at 70 miles on our odometers that day, we realized we had at least 30 more miles to do to get to Darren's house. 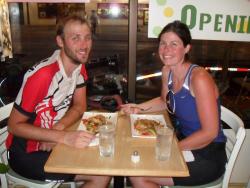 It was hot, I was tired, and what I've discovered about myself in those types of situations is that I get to complain about it for a minute, then just suck it up and do it. I had been wondering when I would do my first century (not only of this trip, but ever), but didn't expect it to be sprung on me. In some ways, it was better that way. We had done the majority of our day before I had to mentally face the thought of a 100 mile day. The last 15 of the day were hard, but I just stuck with my standard mantra for those things: just keep going. It works for me. We got there, after 105 miles, found a Thai restaraunt, and rewarded ourselves for a long day.

Our day in Chicago was busy, with the type of errands one needs a larger city to do. 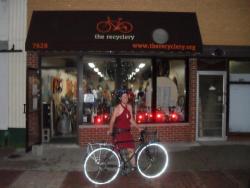 Darren works at a bicycle collective called The Recyclery. They have communtiy hours, where people can come in and use their tools and workspace, and get some friendly instruction as well. We were able to really clean our bikes for the first time on the trip-at this point we had done about 1,200 miles total. With clean bikes and Darrens hospitality to see us off, we were ready to head towards Wisconsin. We just had to get out of Chicago first. As I've mentioned before, on tour it's important to roll with the punches. Illinois kept punching us. We couldn't find the trail to get out of Chicago, and went only 12 miles in 2 hours. Then the trail didn't actually connect with the road we were supposed to turn on, so we ended up in the suburbs, on highways to get back on route. Illinois suburbanites evidently do not like cyclists, as we were yelled at and honked at many times. This had not happened up to that point on our tour, and interestingly enough, when we crossed into Wisconsin, people stopped honking at us, except to do so and then give a friendly wave.

Our first few days in Wisconsin were glorious. The weather cooled from being in the 90's to the high 70's. The landscape began to have more variety and features. There were still cornfields, but rather than mile after mile of unbroken cornfields, there were also rolling hills with wildflowers, cool forested areas, and fields of crops other than corn. 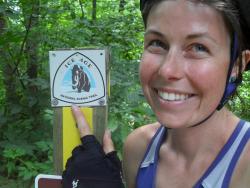 We were on beautiful winding country roads with very little traffic. On one such day, I saw on our map that we would be crossing the Ice Age National Scenic Trail. One of the lesser known long trails in the US, this was very exciting to me as a thru-hiker! Although I like bike touring, I think I'm still more of a thru-hiker at heart, with my eye still set on the Continental Divide Trail as my next adventure.

This brings us almost up to date and current, although our adventures in Madison with my friends Laura and Joe will have to wait for another post. So will the trials and tribulations of a heat wave with 80% humidity; because distance provides perspective, and right now neither of us have perspective, we're just hot, sweaty and tired (Adam thinks I should use the word miserable instead).

Stay tuned for more on Wisconsin's awesome trails and scenery, awful humidity and bugs, and some more gear reviews.