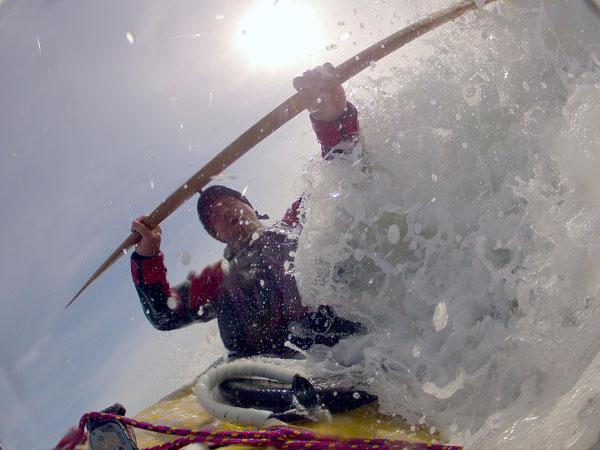 Weapon of Choice: Greenland paddle and harpoon. ...and a Glock 23 full of 155gr. hollow points.

What's at the top of your 'bucket list'?: W. Greenland to Scotland expedition in Traditional Qajaqs

Favorite thing about Next Adventure?: They pay me to teach people how to kayak! (how cool is that?!)

Tell us a little more about yourself!

Been kayaking since I was 9 years old (I'm 53 years old. You can do the math. I'm too old to figure it out). Grew up in S. California and learned to surf at 5 years old. Got my certs for Sea kayaking instruction (ACA). When not paddling the awesome kayaks sold by Next Adventure, I paddle mostly skin on frame kayaks (both modern and traditional design) that I build, and make greenland paddles. Winner of SSTIKS 2016's "Kayaker of the year" competition (1st in Harpoon, 6th in rolling, 2nd in the portage race). Mentor for SSTIKS 2017. ...Yes, I'm one of those weird people who love Traditional Greenland paddling skills!). I also thrive and survive in surf and coastal kayaking situations. Back in the day when I was younger and invincible, I was into Class IV-V whitewater and creeking, and was able to do the occasional 5.12A on the rocks (I can still knock out a 5.10 if needed. ...maybe!). I'm also into experimental archeology, and do things like flint knapping, atlatl-making, blacksmithing, woodworking, Wilderness survival (learned a crap load of that stuff as a recon guy in the US Army). I'm also a bigtime history nerd and in my spare time can be found reading copious amounts of literature on that subject, or watching history documentaries on Youtube. Recently started SUPing. Now I need a 14' displacement hull racer.

So much to do on the water, so little time.